The plan Kyla, Linda, and I had discussed involved leaving Linda’s farm at 7 AM sharp, picking up Gina, and heading to the hunter pace. By my rough calculations, the farm where it was to be held was about an hour and a half from us. I figured we’d arrive around 9:30 AM and have lots of time to sort out any forms, tack up the ponies, and have a nice warm up.

The plan went terrible awry, as plans are wont to do. Kyla ran a bit late. Cal, who had previously been a champion at loading, refused to set foot in the horse trailer until a bucket of sweet feed changed his mind. Linda went the wrong direction on the turnpike. We called ahead to say we were running a bit behind, and the nice lady at the hunter pace assured us it was fine and we’d still get to ride.

We arrived precisely at the time we were supposed set off on the course. We hurriedly tacked up the horses and set off toward the starting line.

Now, neither Kyla nor I had ever been to a hunter pace before. I’ve been on plenty of cross country courses and have foxhunted. Kyla has spent most of her career in the equitation ring. I expected to get a map or an idea of an appropriate time. Instead, we were told to head off to the left and follow pieces of caution tape strung on trees. The path would eventually loop back to the start line where we’d have a mandatory five-minute rest period, then start on the second half of the course. I knew the whole point of the hunter pace was to get as close to the “mystery time” (sort of like an optimum time, only unknown to competitors) as possible. I was still surprised when we weren’t given any idea of how long it had taken other competitors to complete the course.

The first half of the course started with crossing a stream about a hundred yards from the start line and parking area. Gina is not a very rough-and-tumble horse, and the last time I tried to get her to cross a puddle, she jumped over it after throwing a fit. I was worried. Very worried. Poor Cal has been hacked around the hay fields a few times and probably hadn’t seen moving water in his entire life. Gina took a look at the stream and started to back up and wheel around, which wasn’t ideal behavior given the sketchy footing. Brave little Cal took the lead and gallantly walked across the stream, not seeming to notice he was in water at all. Not to be outdone, Gina followed without hesitation.

We warmed the horses up as we navigated through enormous fields, more water, and winding, twisting forest paths. I jumped G over several logs and she acted as though she’d done it all her life. Kyla and Cal made it over a few jumps, too, which seemed to be a positive experience for both of them. We kept a steady canter through most of course, except while climbing and descending the biggest hills I’ve seen in Oklahoma. Gina felt great; she was attentive, courageous, and seemed to be having a blast.

When we returned to the starting line for our rest period, I was surprised to hear it had taken us an hour! We checked in with Linda and told her about our adventures in the woods. She and her Corgi, Carson, had passed the time cutting out horse head shapes and napping (respectively); Linda was very pleased to hear how well the horses had done.

We struck out on the second half. I could feel Gina tiring- she was a bit sluggish and less responsive than she’d been earlier in the day, and understandably so. We took some more fences, including a coffin (!) and a coop (!). The second half of the course was a punishing as the first: steep hill climbs and terrifying descents, with big galloping stretches in between. Kyla and I thought for sure we were too slow; we were overtaken once. The horses were sweaty and exhausted, but they pressed on bravely. I tried to give Gina a good ride, but I could feel myself tiring, too. Kyla complained of her ankles hurting; I could only think of the soreness in my butt.

We finally emerged from the woods into a clearing that ran along the stream we’d crossed earlier. We could see the path to glory: through the clearing, over a road, and across a beautifully flat field to the finish line. We urged the horses forward. I could feel Gina hunker down and find the last reserves of energy. I rode on determinedly. We crossed the finish line at a hand gallop, victorious and light-headed with the pride of completing the grueling race.

It had taken us two hours and nine minutes.

We cooled the horses out and tied them up the trailer with their haynets. Linda joined us as we made our way to the barn where a lunch potluck and the awards were waiting. A poster board showed the times of all 25 teams that had participated as well as the mystery time. The mystery time was two hours and six minutes. Kyla and I looked at each other in disbelief, then broke into unceremonious squeals. We settled down to eat and find out where exactly we’d placed.

When the MFH announced we were third, we whooped with joy as we accepted our yellow ribbons. I have never been so proud of myself, my teammate, or my horse. My horse, the hunter-jumper castoff, the horse everyone was afraid of, the horse that was proclaimed unreliable and unpredictable, had eagerly tackled a long cross-country ride filled with unfamiliar elements and triumphed!

We rubbed the horses down one last time, loaded them up, and drove them home. They were turned out and given a few days off. I headed home and collapsed in an exhausted slumber at approximately 8 PM.

Yikes! It’s been over a month since I last posted. Gina and I are still alive and kicking, although we’ve been doing a bit less lately. The shorter days have killed my riding time on days I work (Tuesday, Wednesday, and Thursday) and I’ve had a veritable horse buffet thrown at me over the last month.

The center’s current director, Linda, (who is the founder and previous director of the program at which I work) has lots of horses. Since she’s 62 and has a bad knee, she offered just about all of them to me to ride. There’s Heidi, a 5 year old Appendix mare; Atut, a 24 year old Trakehner gelding; Xeta, a 4 year old Oldenburg mare; Doc, a teenage Quarter Horse gelding; and Annie, a twenty-something Quarter Horse mare. Linda also has six elderly Thoroughbred broodmares who are enjoying retirement and seven miniature horses of varying degrees of pigheadedness. Linda offered Kyla and me board for our horses in exchange for feeding and mucking stalls a few days a week and keeping her horses in shape.

It’s been a busy month of riding new horses, cleaning stalls, and generally have a good time. I’ve managed to get out and ride Gina a few times- she’s doing well and having a fun time being a fuzzy mess. We’re headed to a hunter pace with Kyla and Cal this weekend; I’m not hoping for best behavior. I’m just hoping for reasonable behavior. Gina is then headed to stay at Linda’s farm for the foreseeable future. Linda’s setup is great- a nice, cozy barn, an arena, large pastures, and about 30 acres of galloping space. I’m pretty excited.

I’ll be sure to get some pics at the hunter pace, but in the meantime, here’s a picture of Heidi being a goober. 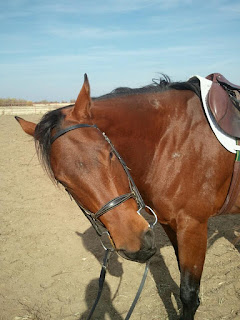