Day 2- Your Most Exciting/Intense Moment at a Show


In late 1997, my parents and I began shopping for a horse to replace my saintly Quarter Horse mare, Sadie. I was a tall youngster and Sadie was a very short horse. (She was technically a pony, standing just a smidge over 14 hands.) Sadie had packed me around local hunter shows, helped me learn to jump, and taken me to a Pony Club eventing rally, all without batting an eye. She was exactly the type of horse a young beginner needs.

My next horse, Spike, was a entirely different animal. He was a narrowly built, 15.3 hand Thoroughbred-Quarter Horse mix. (His dam was a quarter Quarter Horse, and his sire was a Thoroughbred. Allegedly.) Spike was a beautiful dark bay, whose coat was totally black in the springtime, before it was bleached by the sun. He was fast and was reported to jump four feet without difficulty. I took him for a test ride and was smitten. I’d just started eventing through Pony Club and was jealous of the older members and their sleek, fit cross-country horses. Here was my athlete. Here was the horse that could take me to the prestigious Preliminary level. Spike came home to our farm the next week. 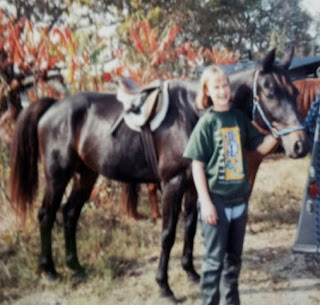 Over the next few months I learned more about Spike. He was impossible to discipline, as he reacted violently to smacks with a crop. He very rarely refused jumps, but when he did, he threw a fit, bucking and pawing. He was frighteningly fast, often running away with me during cross country schooling sessions. 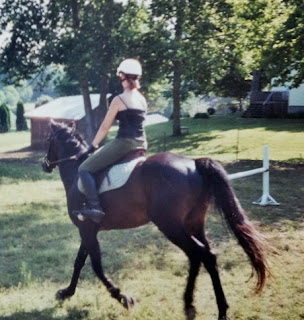 I took him to the Mid-South Pony Club eventing rally at the Kentucky Horse Park in June 1998. Spike put in an acceptable dressage test on Friday. So far, so good. Cross-country day dawned, as it always does in Lexington in summer: sunny and hot. Spike was fractious from being stalled. I was nervous, as all of the jumps were maxed out (to 2’6). I was wearing my glasses for the first time at a show, too, at my mother’s insistence.

Spike was edgy, and jumped the first two jumps like an idiot. The third jump, a dark colored park bench, was disastrous. Spike refused once, then twice. On the second refusal, I fell. As this was long before the “one fall you’re out” rule, I remounted, glasses askew. I was furious. I rode Spike hard at the bench, and he sailed over. The fourth jump was a big, black coop on a slight downhill slope. He refused. I refused to give up. The jump judge asked us to wait for the next competitor to pass. We danced in place as a small white pony made short work of the coop.

Something in Spike’s brain broke after that. He was fixated on the white pony. The rest of the course went by in a horrifying blur as he strained to catch up with the pony. The jumps no longer mattered; we had no more refusals. We zoomed along at a brisk gallop. I was absolutely terrified. At the end of the course, I jumped off, handed my horse to the team’s stable manager, and met my dad at the Gatorade cooler.

His assessment? “Well, at least your mother isn’t here.”

We went on to have a perfectly good show jumping round the next day. Stories about Spike were told for years afterward at Pony Club trail rides and cookouts. Our cross-country ride lives on in infamy. 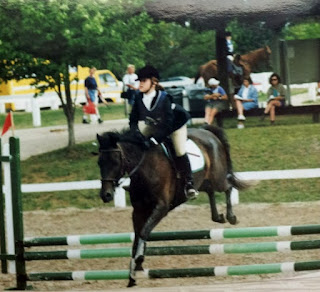 2 thoughts on “30 Day Blogging Challenge: Day 2- Your Most Exciting/Intense Moment at a Show”