Temperatures plummeted Tuesday; the high was around 40F. Yesterday and today, the high temperature was only in the 30s! Combined with the wind chill from Oklahoma’s never-ending breeze, it feels like it’s in the 20s.

Oh, yeah, and there was an earthquake yesterday afternoon! (Technically, the earthquake was just across the border in Kansas, but it was felt across the Northeastern OK area!)

I spent Sunday evening patching the horses’ blankets in preparation for the cold front; I snuck them into the local laundromat on Monday, so by Tuesday, they were clean, repaired, and ready for ponies!

I rode Gina before work on Tuesday. The Harvard Fox Hounds hunter pace is coming up next Saturday and I wanted to take Gina on some longer conditioning rides before asking her to go on a two-hour trail ride with jumps. 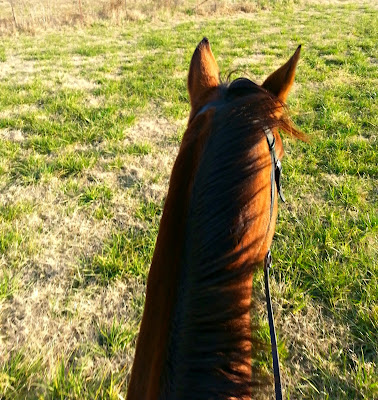 She was superb. Gina is such a nice horse to hack in a field. Unlike Moe, Gina doesn’t equate riding in the open with going as fast as possible. (I totally realize I probably taught Moe to be bonkers.) She’s content to walk quietly on a loose rein, doesn’t spook at much, will go faster when asked, and will come back easily to a walk or halt.

We went on another ride this morning, alternating between walking, trotting, and cantering. It was cold and windy, but Princess Pony seemed happy to work. I’ll admit I was happy too- it’s nice to go on long rides in the open at some speed after being cooped up in the small indoor at night!

I’m very excited about next weekend’s hunter pace! Gina and I are heading up what’s been dubbed the “Balls to the Wall” team (the other team from the barn is “Slow Pregnant Team”, as one of the members is a couple months pregnant and won’t be doing much galloping or jumping). My reputation as a crazy eventer is firmly fixed in everyone’s mind, I guess!

5 thoughts on “An early winter”