I’d like to introduce a new feature here on Hand Gallop: Books With Horses On The Cover (or BWHOTC for short!). Is there a better name for this? Probably. Can I think of one? No. (Suggestions are, however, welcome.)

When I had friends in town last weekend, one of the Tulsa institutions I dragged them to was Gardner’s Used Books. While it’s notable for being Oklahoma’s largest used bookstore (at a whopping 23,000 square feet), I enjoy it for its little charms: the slightly squishy carpeting, labyrinth-like layout, musty smell, confusing checkout line, and endless selection of books. My friends are both archivists with an appreciation for old books, so while they were perusing the history section, I found the animal section. I scored Modern Showjumping by Count Toptani, Practical Horseman’s Book of Horsekeeping from the 1980s, and The Treasury of Horses. None were over $5.

However, those books, while fine and interesting tomes, aren’t what I want to share with you today. What I want to tell you about is the absolute glut of fantasy novels featuring horses on the cover. Now, I am a huge fantasy and sci-fi fan. I read it all: the good, the bad, the ugly. Don’t ask me how many times I’ve read Anne McCaffrey’s Dragonriders of Pern series. Lord of the Rings? Check. Tamora Pierce’s The Song of the Lioness series? Check. Everything Terry Pratchett has ever written? Check.

So when Johnny finds novels with ridiculous looking covers (which are rampant in Gardner’s), I usually buy them. When they have horses on the cover? Well, what do you think led me to Mercedes Lackey’s Heralds of Valedmar series and Kristin Britain’s Green Rider books? THE HORSES, DUH.

Now, I said all that to say this: The BWHOTC feature will cover just that- books with horses on the cover. They’re probably not horse books. Horses may not even feature very prominently in them. But I like to read, and having a horse on the cover is as good a reason as any to pick up a new novel. 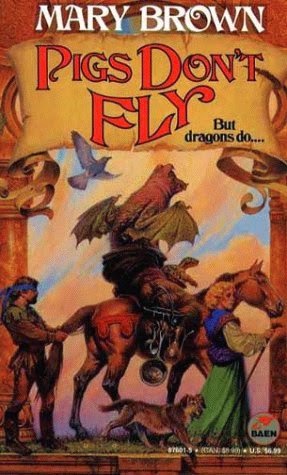 How could I not want to read this book? There’s a horse, a winged pig riding said horse, a dog, a blindfolded man clutching the horse’s tail, and a woman with a staff. Plus, the horse isn’t wearing a bridle, which suggests some sort of mystical force at work- or a gross oversight. Either way, it’s fun, right?!
Pigs Don’t Fly begins auspiciously: “My mother was the village whore, and I loved her very much,” states Summer, the novel’s protagonist. After her mother dies, Summer isn’t keen to pick up her mother’s trade and instead takes her dowry and a magical ring left by her dead father and hits the road to look for a husband.
Summer’s magical ring enables her to communicate with animals, which is how she picks up a dog, a horse, a bird, and a winged piglet. She also find a blinded, amnesic knight. Together, the unlikely group searches for the knight’s home; various members find their true homes along the way. The winged piglet undergoes a dramatic transformation toward the end of the novel, and forces Summer to reconsider what it is she wants from her life.
Brown’s writing is good, and the characters are likable. (I could have done with some more of the talking horse, but that’s just personal preference.) The story is interesting and isn’t so full of fantasy tropes that it’s boring or trite. The book is part of a series, but it isn’t necessary to read the previous book. I haven’t read subsequent books, but as Pigs Don’t Fly ends on something of a cliffhanger, I’ll be searching for its sequel next time I’m in Gardner’s.

6 thoughts on “Books with horses on the cover”