Late Tuesday morning, I headed to the barn with the intent to reconfigure and raise my jumps. I was feeling triumphant after Gina’s success over the grid on Friday and wanted to push her just a little more. 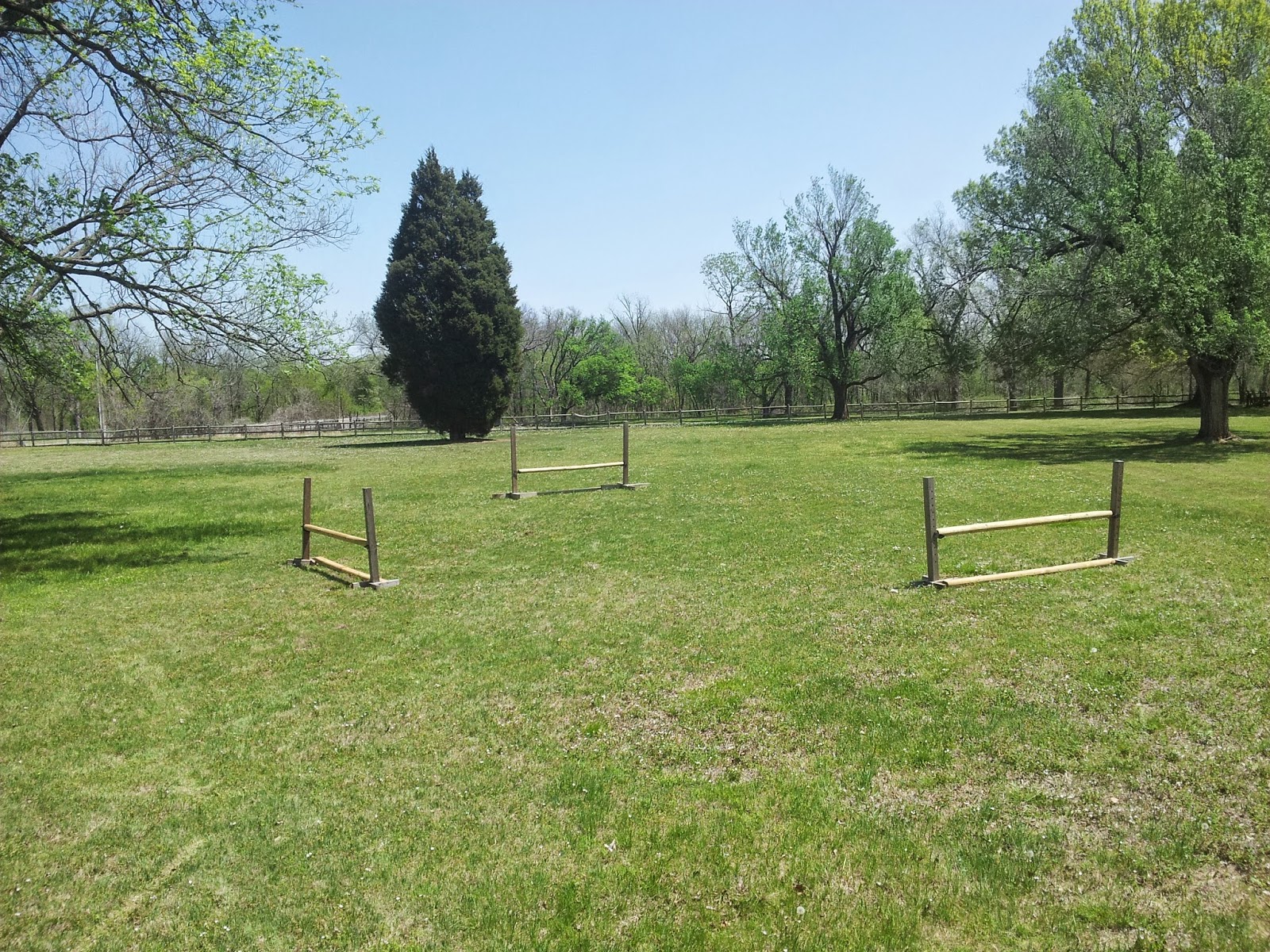 There’s a lone vertical and a related distance (set at about 66′ apart, or about 4 strides). I also appropriated the footrests from nearby Adirondack chairs and set a warm-up fence. It’s about a foot tall. The verticals range from 2’3-2’6. 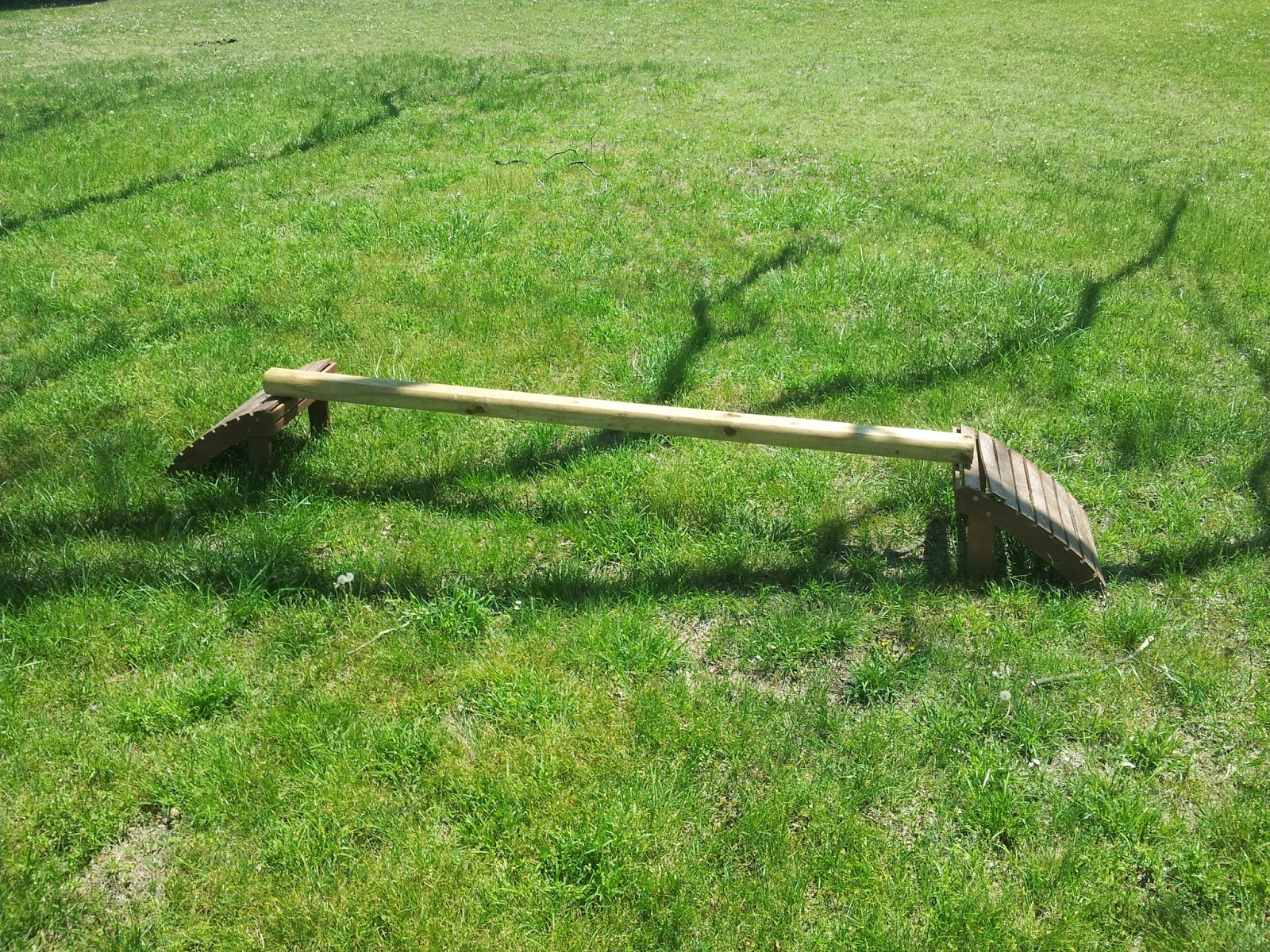 Gina was definitely up; she was restless at the walk and trot, but settled into a brisk canter nicely. I approached the warmup fence, and she stopped. Not a nasty stop- more of a pretending-to-be-freaked-out stop. I tapped her with my crop and made her walk over it. (It’s a FOOT TALL, come on Gina!) On subsequent returns to the little fence, she popped over it appropriately without any trouble.
I took her over the lone vertical with no issues. She got stronger and stronger as we went on. She also got kind of fussy about turns. The area where the jumps are is enormous. I set the jumps so there was plenty of room for big, looping turns and long approaches. I didn’t want Gina to feel crowded, and I like having plenty of space to make adjustments. I figure there’s always time to work on things like rollbacks; that time is not now.
Inevitably, every time we’d make a turn to approach a jump, Gina would try to pop her outside shoulder out, do a step or two of sidepassing, shake her head, and suck back behind my leg. I’m giving her the benefit of the doubt and chalking it up to middle age and decreased flexibility. Once we’d get around the turns, she’d surge forward again and eagerly head toward the fences. I’ve been reluctantly pricing joint supplements; plain old MSM worked very well for Moe when he had some stiffness last year. I’ll get some for Gina and see if it helps.
At any rate, my eye was better and Gina and I took perfect distances to many of our fences. The four-stride line rode very well most of the time. I concentrated on seeing a distance at all, and as a result, even our long distances were ridden smoothly; I saw the long spot, told Gina to take it, and she did. 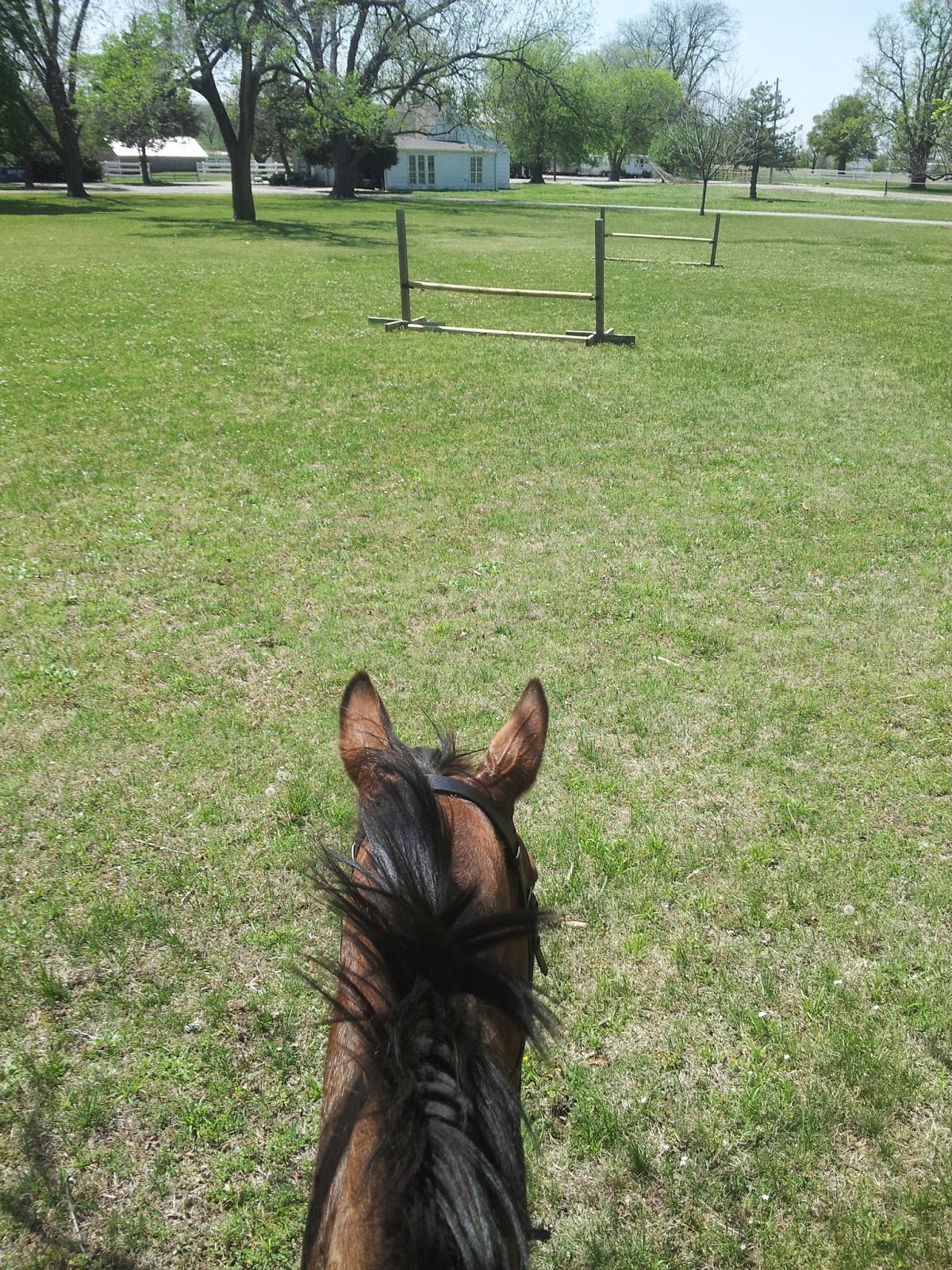 Gina was hauling around like a freight train for most of the ride, but I’ll take forward and willing over reluctance any day. Since all of the jumps were verticals, we made a course out of them very easily: start with the lone vertical, turn right to the line, turn right to the vertical, turn left to the line, turn left to the vertical. She landed most of her changes and was happy to do a flying change for any we missed.
I’m so pleased with her attitude lately that I’m considering doing something really dumb and taking her to a show that includes jumps later this year. Johnny’s against the idea, because he’s convinced she’s up to some greater plot. (I reminded him she’s just a horse.)
Thanks for all the well-wishes for Moe’s recovery- the eye is looking good and while he’s still grumpy about being stalled during the day, he’s taking his meds well and being fed more treats than is probably healthy.