After ignoring me for a week and a half, Gina was sure happy to see me this afternoon. I loaded my pockets down with granola bars, shouted “MOE! GINA!” into the pasture, and was rewarded with the sight of my two ponies (and their elderly Arabian friend) galloping toward me. While Moe’s always come ambling up at the sound of his name, this is new for Gina. Whatever, I like it!

I settled Princess Pony in the cross ties and proceeded to talk for what felt like an hour with the barn manager; we were mostly talking feed regimes and adjusting my horses’ to better reflect their workload and age. Gina stood quietly, for the most part, until I ducked in the tack room to grab her bridle. I heard an awful racket and heard the barn manager saying “Easy, easy!”

Apparently, Gina had taken it upon herself to rear up in the cross ties totally unprompted. She miraculously managed to not smash into a light bulb or otherwise electrocute/injure herself. She stood totally still after that, as if she’d frightened herself. What a freak.

We were having the loveliest, softest, best dressage school when a dog appeared out of nowhere. It ran up to Gina, weaving between her legs and under her belly, dropping behind to nip at her heels, and at one point, jumped up her side to try and sniff my foot. Gina took it like a champ, albeit an irritated one. She shimmied away from the dog, gave a half-hearted kick at it, and otherwise ignored it as best she could. We tried to continue on, but the dog was too disruptive. (I mean, have you ever tried to trot with a dog leaping up your horse’s side? Yikes.) I dismounted, walked Gina and the dog back to the barn, and locked it in a stall with a full water bucket on the ground. The dog was not thrilled and spent the next half-hour whining pitifully.

Gina continued to be a freaking dressage boss, and when we were finished, we headed back to the barn to see our new dog friend. Gina was not putting up with the dog’s shenanigans; as soon as I’d unbridled her, she promptly escorted herself into an empty stall and waited for me to finish untacking her. She laid her ears back and bared her teeth at the dog, who totally did not get the message and ran around underneath her anyway.

The dog had a collar on, but no ID tags anywhere. She was super friendly, totally ignorant of how to behave around horses, and was obviously well fed and cared for. Except, you know, for the whole no ID thing.

I checked with the barn manager, who said he’d run the dog off the property yesterday. Our best guess is that she escaped from the apartment complex across the street- barn manager was planning to check with the office manager of the complex to see if anyone had reported a dog missing. I hope she finds her people!
Gina had a well-deserved roll after I rinsed her off, totally undoing all the hard work I’d put into removing the clods of mud she’d coated herself in. 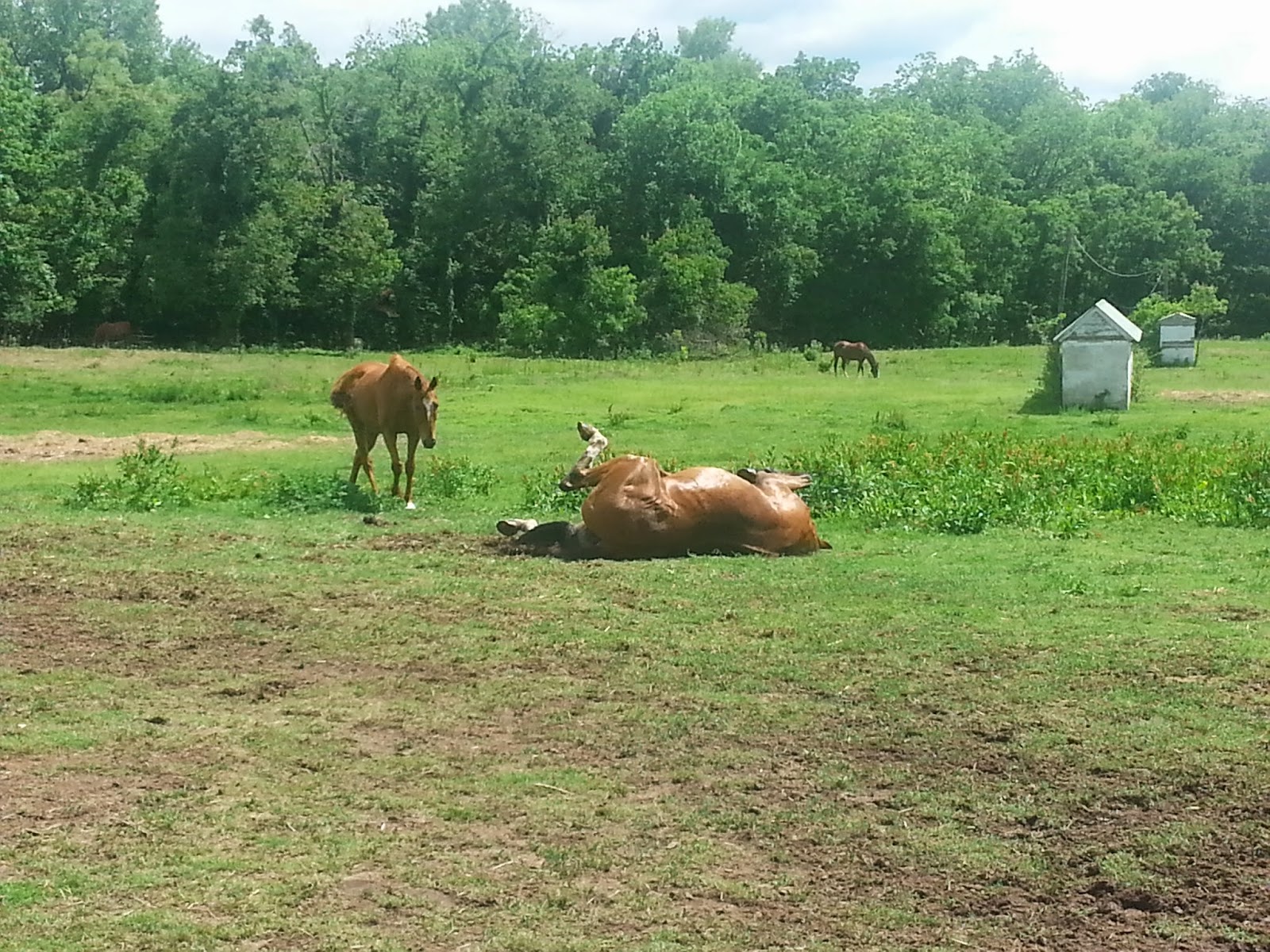