A few weeks ago, I bought a couple of bits from Hillary over at Equestrian at Hart. I bought them mostly out of curiosity- Gina has gone basically the same in every snaffle I’ve ever stuck in her mouth and isn’t so strong over fences or in the field that I truly need more stopping power.

I tried the Happy Mouth mullen mouth two ring elevator this morning while we did a little jumping. As I said, Gina isn’t so strong over fences that she really needs a bit that’s stronger than a snaffle, but she does get heavy and on her forehand, especially after the fence. 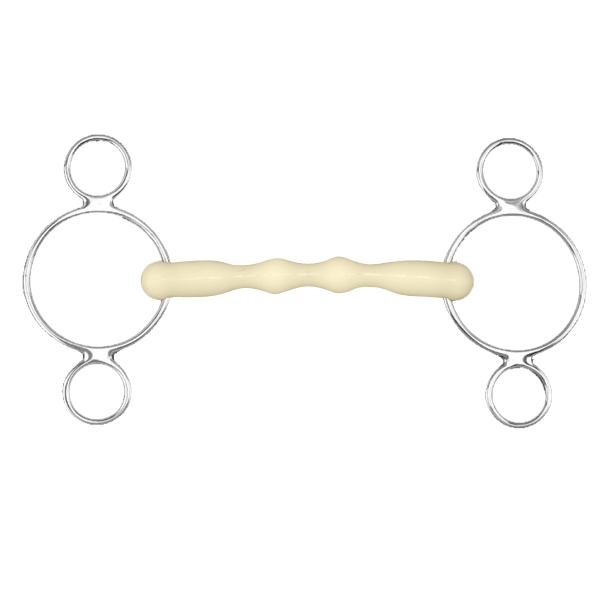 First of all, good luck finding any reliable information on this thing. It’s variously termed a 2-ring Dutch gag, 2-ring elevator, 2-ring bubble bit, and universal bit. Different people have different opinions on if you’re supposed to use one rein or two or use a curb strap. Some people insist the lowers the head, while others are adamant it raises the poll.

I was impressed with how Gina responded to it on the flat. She was super soft and round with very little input from me. I felt like her hindquarters were really engaged- like she had totally shifted her weight back to her haunches.

Over fences, we were kind of a mess. Gina was having A Time and felt it necessary to stop and snort at each fence (all of which were exactly the same fences she jumped flawlessly last week) before jumping it. No amount of clucking or kicking could persuade her otherwise. She was rushed to every fence and all of our distances were disgustingly long. I was hesitant to give her any really firm half halts before the jumps, because I didn’t want her to think for one second that she shouldn’t go over them. (I guess this means we’ll be setting up a gymnastic next week…)

After landing from each jump, Gina tried her usual pull and run; I’d give her a half halt, and she’d respond by vigorous head shaking and then slowing to a trot or walk.

I’ll probably try this bit again to see if she was just having a weird day (as is so often the case), or if she really didn’t like the bit. Oh, Gina…