Yesterday was beautiful. Sunny, cloudless, 45 degrees. After more than a week of snow, ice, freezing rain, and highs in the teens, I was super ready to hit the barn. 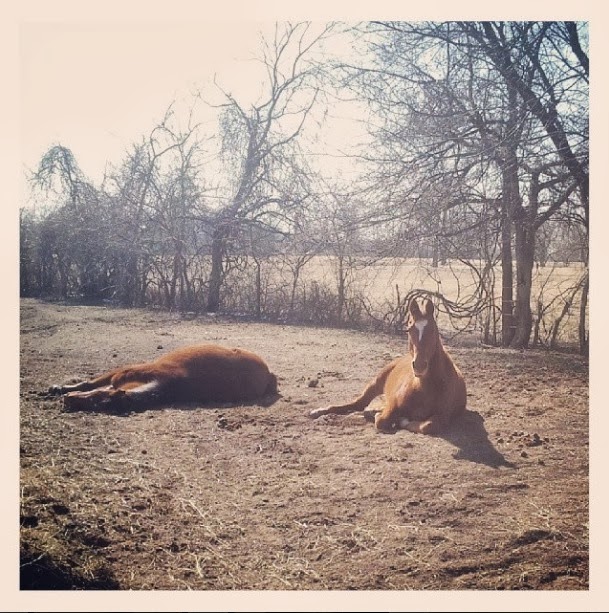 The ponies were sprawled in the sun, dead-horse style. Moe perked up when he noticed me; Gina continued to ignore me until Moe was completely up and eating cookies. Brat.
I saddled and decided to take a stroll in the big pasture. It’s about 22 acres, has a large pond, and is home to 9 horses and a donkey. Moe and Gina have met these horses before, and the barn manager assured me that people ride in the pasture frequently with no trouble from its residents. Moe is an utterly reliable creature and totally submissive. I figured that even if a horse or two wandered our way, Moe would be so nonthreatening that they’d lose interest quickly.
Moe was much happier to be out in a field hacking around than being forced endure yet another walk-trot dressage school. Until we saw THE DISH OF DEATH: a fallen DirecTV dish close to the fenceline. (It had been mounted on the PVC fencing for reasons I don’t full understand.) Moe lost. his. damn. mind. He snorted, danced away from it, stopped to stare at it, etc. etc. The horse that sails over any obstacle, including a jump with lighted sparklers and the hood of a car, was balking at a relatively small hunk of plastic on the ground. What?
While he isn’t brave, he is (mostly) obedient; shaking and rolling his eyes, he marched past the horrifying dish after a couple of jabs from my heels. The dish of death forgotten, we continued our walk. I spied an appealingly placed fallen tree branch, so, of  course, I walked my horse up to it. Of course, he gave a little hop over it. Of course, he cantered away. Of course, this alerted every horse in the pasture to our presence.
Our jig was up. The donkey led the charge, which terrified Moe more than the satellite dish. Nine horses followed at paces varying from “lazy trot” to “working walk”. Moe tried to flee in terror and nearly fell into the still-frozen pond. I grimly hung on, clutching mane and yanking him into the tiniest circle imaginable. Rather than fall over, he stopped, and stared in utter fear at the herd of mildly interested horses headed our way.
The horses lost interest pretty quickly and ambled back over to their round bales or went back to dozing in the sun. Moe, however, was out of his mind for the day. We spent the next 15 minutes working on figure-eights and serpentines, none of which refocused the poor horse. We ended on the best note we could, walking calmly for approximately 3 strides on a loose rein.
When I turned him out into the field, he was bitten on the butt, retreated to a round bale, and hid behind Gina.

Sigh. So much for a quiet, relaxing ride.

2 thoughts on “In Which Moe Is Not Brave”