It’s been a while since I updated, mostly because I had nothing to report. Work was keeping me busy, my arm was healing, and my horses were growing wild and woolly in my absence.

My arm started to feel normal a few weeks ago. It stopped feeling like it was going to explode when I lifted up hay bales or water buckets or heavy western saddles. It stopped aching in the cold. It just felt like a regular arm. So I told Anne I was thinking about hopping on one of the Wild Bunch- she wasn’t super enthused about the idea, but agreed I probably couldn’t get into a whole lot of trouble walking around the arena on creaky old Moe.

Moe was delightful; he walked and trotted around like an angel and seemed especially pleased to have been chosen to go for a ride when Colter had followed me around the paddock like a big dog.
The next weekend, I went out to ride again, fully intending to saddle up Moe for another leisurely stroll. Instead, I was surprised to catch Princess Gina, who came up to me for the cookies and docilely followed me into the barn. I saddled her up and crossed my fingers she wouldn’t buck me off. She was very good and didn’t act at all as if she hadn’t been ridden in close to six months.
Atut was being troublesome for Anne, so I offered to get on him. It’s not that Anne, my marvelous dressage coach, can’t handle a 24 year old Trakehner schoolmaster. It’s more that she feels bad about walloping the crap out of him when he’s being naughty. I put old Atut through his paces. He’s such a nice horse, but boy, if he doesn’t feel like doing something, he gets crabby! He wriggled sideways and moved forward in slow motion until I really pushed him- then he was brilliant. I felt up to cantering him, and he enthusiastically spent the next five minutes tearing around the arena at an extended canter. Anne was tickled. I was a little puzzled as to how I got an elderly gelding to move faster than a trot. I guess I just have that effect on horses.
The only downside of the day? The rats’ nest that Gina’s tail has become without regular brushing. She has a very thick, long tail, and between the burrs and the wind, it’s become a hopeless mess. I’m still trying to figure out what to do about it.
In other news, Johnny and I put a Christmas tree up. It’s hung with a combination of his Star Wars-themed ornaments and my horse-themed ornaments. Here’s my favorite: 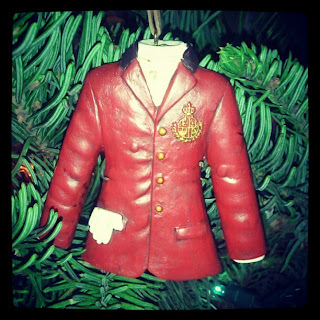 I also had a doctor’s appointment last Friday. Here’s the most recent x-ray of my arm: 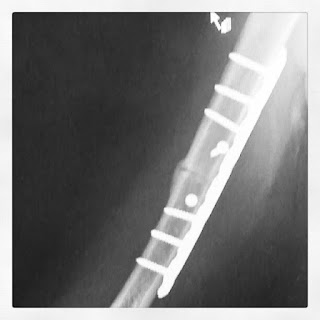 My doctor was very pleased with the way the fracture is healing. So pleased, in fact, that he released me to ride! I’ll admit, I feel a little better about getting back to work on the Wild Bunch with my doctor’s approval.
The arm really is impressive, considering how it looked when I fractured it: 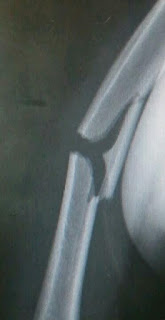 Oh well. At least it meant Anne could get me a funny birthday present: 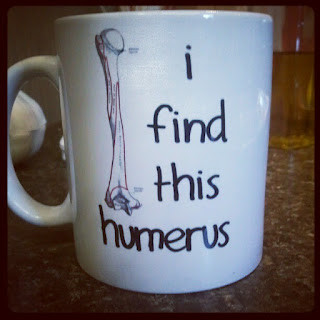 A healed arm and my doctor’s permission to ride were pretty much the best Christmas presents I could have received, but that didn’t stop Johnny’s family from trying! We spent last weekend in Texas, celebrating the holiday with his grandparents, aunt, uncle, cousins, sister, and parents. I made out with all kinds of loot from my SmartPak wishlist: a new velvet helmet, Ariat gloves, and a monogrammed dressage bridle! I also got a couple of Breyer Christmas ornaments (to put next to Darth Vader on the tree, I suppose) and a Dover Saddlery gift card. Excitement! Johnny got me a beautiful watch, which I will probably wear to the barn and get disgusting in short order.
All in all, a very good Christmas. We don’t have much planned for New Year’s- just getting together with friends and playing board games all night. But you can bet I’ll be at the barn as much as possible over the break, combing out Gina’s stupid tail and riding all the beasties!