I went to the barn to ride both horses late yesterday afternoon. I saw my student, who was headed out on her pony. She returned a half hour later to tell me she had dutifully done the lateral exercises I’d given her as homework and she was certain her horse had taken a true sideways step in each direction. I was inspired by her success, so I grabbed Gina and decided to do some dressagin’.

I called it quits pretty early (after about 30 minutes) since she was being so good; Gina is a horse with whom I do not like to push my luck. Then I trimmed up her face, bridle path, and fetlocks while stuffing her face with granola bars. 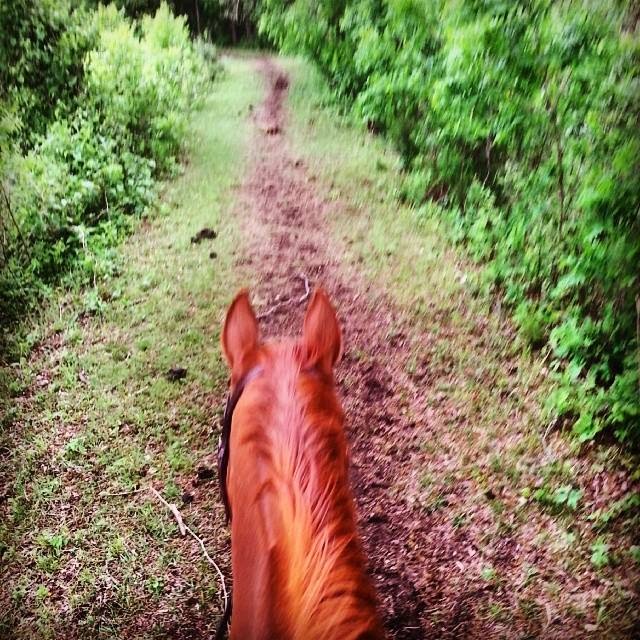 So we piddled around the pasture for half an hour, mostly at a walk. We cantered a little bit and jumped the log pile. I managed not to fall off, while I remembered why I don’t usually ride Moe bareback. (High withers, uncomfortably jarring trot.)
But you know what? It was pretty fun to just piddle around, appreciating the weather and the scenery and the sleek little red gelding beneath me. It was nice not to have a plan or work on anything in particular. I jumped off Moe in the pasture and took his bridle off, but instead of taking off to join his horse friends, he walked with me back to the barn. I let him through the gate, and he walked himself into the barn and into a stall, where he waited for me to hang up his bridle, feed him more granola bars, put on his fly mask, and spray him down. Then he went back out to the pasture, waited until I got into my car, and wandered back over to the rest of the herd.
What a good horse.