Cutty’s owners have three goats. Two are tiny little female fainting goats. One is a buck; I couldn’t tell you what breed he is, but he has long, straight, smooth hair and regularly pees in his own mouth. Goats are so gross.

The goats are kept as pets for no real reason other than Cutty’s owner’s husband likes roping them and occasionally shooting them with a BB gun when they start trying to climb the fence. I was told I was free to let them out of their small pasture into the horses’ large pasture when I while I was riding. The goats seem to enjoy grazing, and it never hurts to have a horse desensitized to bleating, smelly animals who urinate in their own mouths.

When I went out to ride Cutty yesterday, I decided I’d get him used to a rope swinging around his body and head, as his owner’s son might want to rope off his some day. I don’t know the first thing about roping, but after years desensitizing horses to all kinds of weird stuff at the therapeutic riding center, I felt pretty confident I could get him used to it.

He was totally unfazed by the rope swinging all over the place and hitting him, so on a whim I decided to let the goats out, tack Cutty up western, and attempt to rope one of them. Since my chances of actually snaring one of them was extremely slim, I figured we’d have some fun chasing them around. Cutty seems bored beyond belief with arena figures and dressage work and a bored horse isn’t a happy horse! 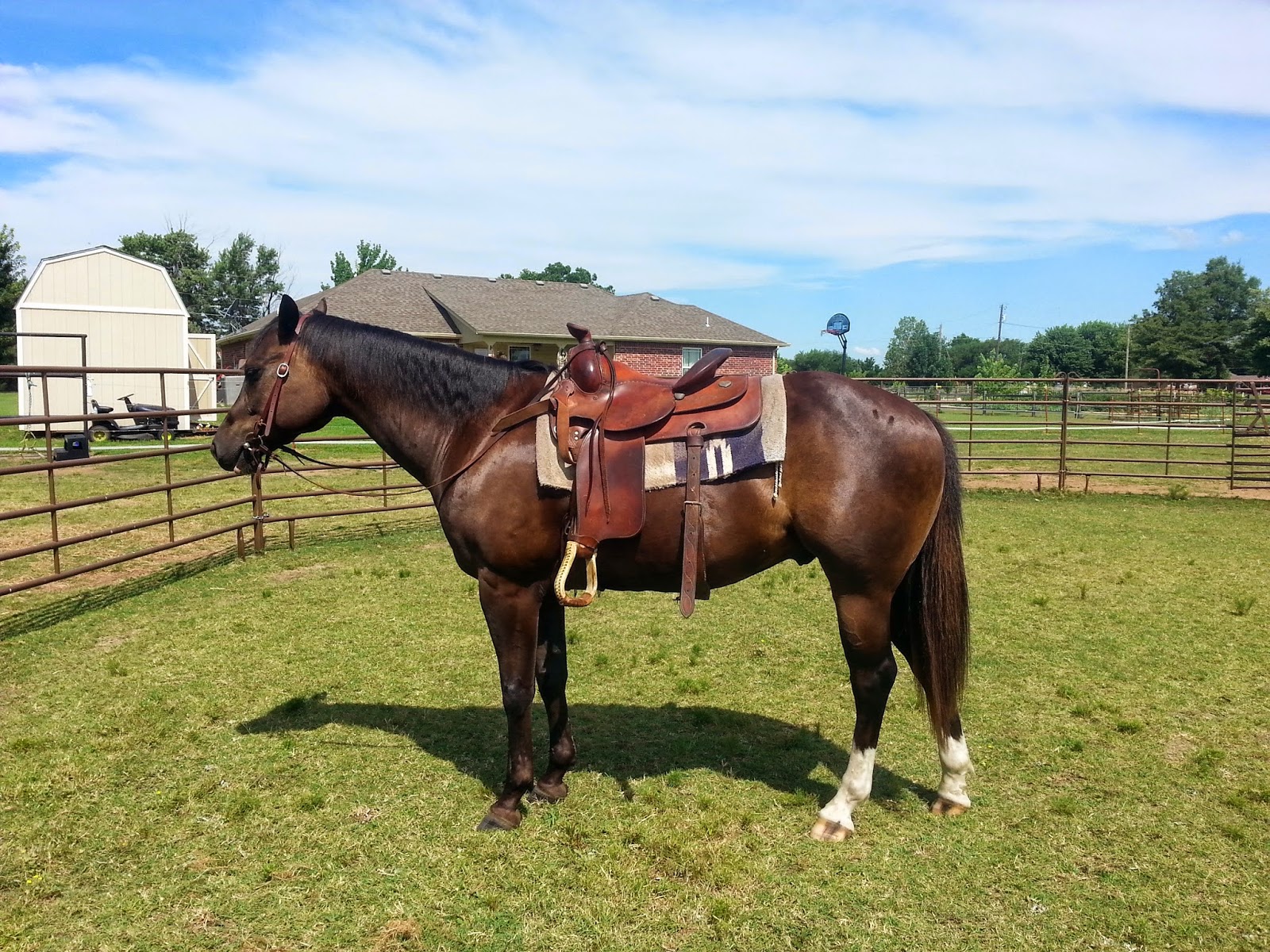 I borrowed a western saddle belonging to his owners and climbed aboard. I had some trouble managing the reins and extra rope in the same hand, but eventually figured it out. I kept the rope swinging above Cutty’s head as we proceeded around the pasture at a walk.
Imagine, if you will, a somewhat overweight girl riding the world’s pokiest horse while wearing gray houndstooth riding breeches, tall boots, and a helmet, swinging a lariat above her head. (Hey, I would’ve worn jeans with cowboy boots had I planned this in advance.)
I think the neighbor checking his fences deliberately did so slowly so he could alternate between gaping in disbelief and snickering.
Anyway, after we warmed up and I reminded Cutty that he does, in fact, know how to neck rein, it was goat time. The goats had wandered to the far end of the pasture, so I sent Cutty trotting toward them. He pricked his ears and eagerly picked up his pace. The goats suspected nothing. Cutty started to canter. I made a feeble attempt to throw the rope at the buck, who bleated with surprise (and probably peed) and took off. The does were right behind him. Cutty was hot on their heels and sprinted after them in the direction of the horses’ run-in shed. The goats ducked in before I could attempt another throw; Cutty stopped, walked under the shed, and sniffed the buck. I steered him out, leaving the goats to eventually wander back out to the field while Cutty and I worked on turns on the forehand and leg yielding.
Once the goats had forgotten the previous attempt to catch them, I turned Cutty toward them and let the reins loose. He happily lumbered toward them at a brisk canter, ears forward. The chase was on again- the buck was already headed toward the shed, but Cutty was faster. I attempted to turn him in front of the buck to cut him off, but Cutty just kept plowing forward. The goats were safe again!
When the goats emerged from the shed, I attempted to have Cutty cut one from the group- he was totally uninterested and only wanted to chase them again. The goats were wise to our game at this point and squeezed back into their pasture through a narrow gap in their gate. They hid there until I dismounted about 20 minutes later.
It was so fun to let Cutty make some decisions about what to do with himself! He seemed to have a blast and was definitely moving faster and with more purpose when he was running down the goats. He’s got tomorrow off to recoup, and we’ll see if he’s still excited when I put my jumping saddle back on him Friday.