Yesterday I accompanied my friend Holly to her weekly riding lesson with our mutual friend, Richal. Richal’s a dressage queen with an acerbic sense of humor and a legion of minions. It’s always funny to see a group of small children struggling to rake the barn aisles or fill water buckets. Plus, Richal wanted me to ride one of the many OTTBs she’s acquired in recent months. I couldn’t resist.

Unfortunately, the horse I was slated to ride, Ben, had pulled two shoes. So I was offered Freddie, a little 5 year old bay mare who’s been off the track for two months. 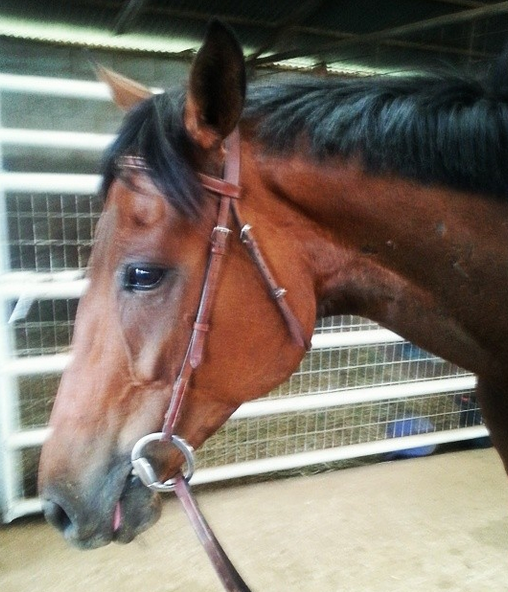 Freddie (Jockey Club name Expect Freedom) was a total doll- easy to ride, eager to learn, and only tried to snatch the bit in her teeth and run off once. I’m always impressed with how well even recently off the track TBs handle things- at one point, there were 4 other horses zipping around the arena, a section of electric fencing flapping in the wind, and 3 dogs underfoot. Freddie was unfazed. 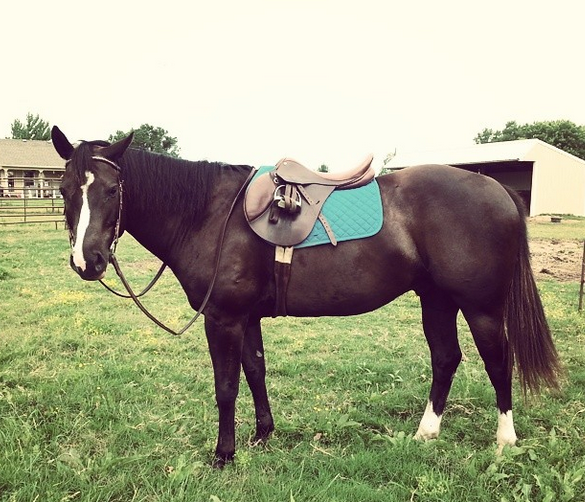 Cutty belongs to one of Johnny’s coworkers. Said coworker has a teenage son who’s been working on a ranch for the last couple of summers and wants to start riding more at home. Johnny was asked if I’d be interested in getting the horse fit and teaching him to neck rein. I talked with the coworker’s wife, who’s the most experienced equestrian of the family, and explained that while I am no western trainer, I could definitely get Cutty fit, probably teach him to neck rein, and desensitize him to just about anything. That sounded fine to her, so I’m hired! I’ll be riding him 5 times a week for about a month.
Cutty is a 7 year old Quarter Horse gelding from Germany of all places. His former owners moved to the States a couple of years ago and brought their horses with them. Johnny’s coworker has had the horse for about 4 months and Cutty’s mostly been hanging out with the family’s retired 24 year old Appendix gelding. And eating. That horse loves to eat.
He’s very willing to learn and eager to please; he seems reasonably intelligent and is already starting to get the hang of neck reining and leg yielding. He is very out of shape, though, and gets winded easily. So we’re doing lots and lots of walking. (Which, of course, is a great gait to work on neck reining and leg yielding!)
I haven’t neglected my two beasties, though. Gina’s fat leg got hosed yesterday, and I rode Moe. Moe felt slow and cranky- not tired, but straight up cranky. That’s very unusual for him, so I just walked him in the pasture on a loose rein for half an hour and called it a day. Here’s hoping fat leg disappears and Moe’s in a better mood this weekend!

One thought on “Riding all the ponies”