Despite the oppressive heat, I managed to ride Gina twice last week (Monday and Friday). We put in some nice dressage work, concentrating on shoulder-ins and lateral movements. We also managed to get around our little jump course again in the opposite direction. G wasn’t very pleased about going the other way; at first, Anne and I were a bit confused. After thinking on it a bit, Anne suggested it’s probably because of the turn from fence 3 to 2 (remember, we’re going over the fences in reverse order). 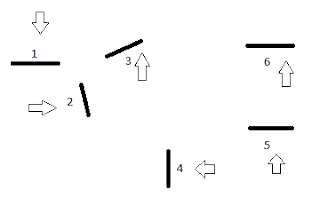 We approached fence 3 on the left lead, but over the pole, I started to look for fence 2 and shift my weight, asking for the right lead. G had a bit of a fit and popped her left shoulder out, threw her head up, and generally acted like a brat. She didn’t refuse to go over the pole, or run out, or have a huge blow up, though. I consider it a success. We took the tricky turn a couple more times and both she and I settled down and rode it with a minimal amount of fuss. It’s easy for me to choke up on the reins and try to muscle her around, but G isn’t the sort of horse that takes kindly to that sort of treatment. Riding her is a give and take on both our parts.
Last week we also had a very pleasant ride over the ‘jump’ pictured at the top! I couldn’t be more pleased with that. Two months ago, this combination of standards and one pole propped up six inches would have thrown Miss G into a frenzy of backing up, leaping four feet into the air, and/or rearing. Last week? Trotted over it without batting an eye. This is progress, people, one six-inch fence at a time.
I also rode Monday and set up a less twisty pole course. It went swimmingly, with Gina trotting and then cantering around it eagerly. I think we’re almost to setting up tiny crossrails. Almost. Another victory on Monday: Anne, a self-described weenie, hopped aboard G for her cool-out! Anne and Gina are a nice-looking pair and both seemed happy with the ride.
I’m going out of town tomorrow through next Wednesday; Johnny and I are visiting Milwaukee with one of my collegiate friends. G gets to enjoy a few days off, but then it’s back to the grind. There’s a dressage schooling show at the end of July that I sort of have my eye on…