As I mentioned a couple of months ago, Carson found a new home; I was very sad to see him go, as I thought he was a very talented and fun horse. (I would have liked to buy himself, but I just can’t pay board on three horses!) 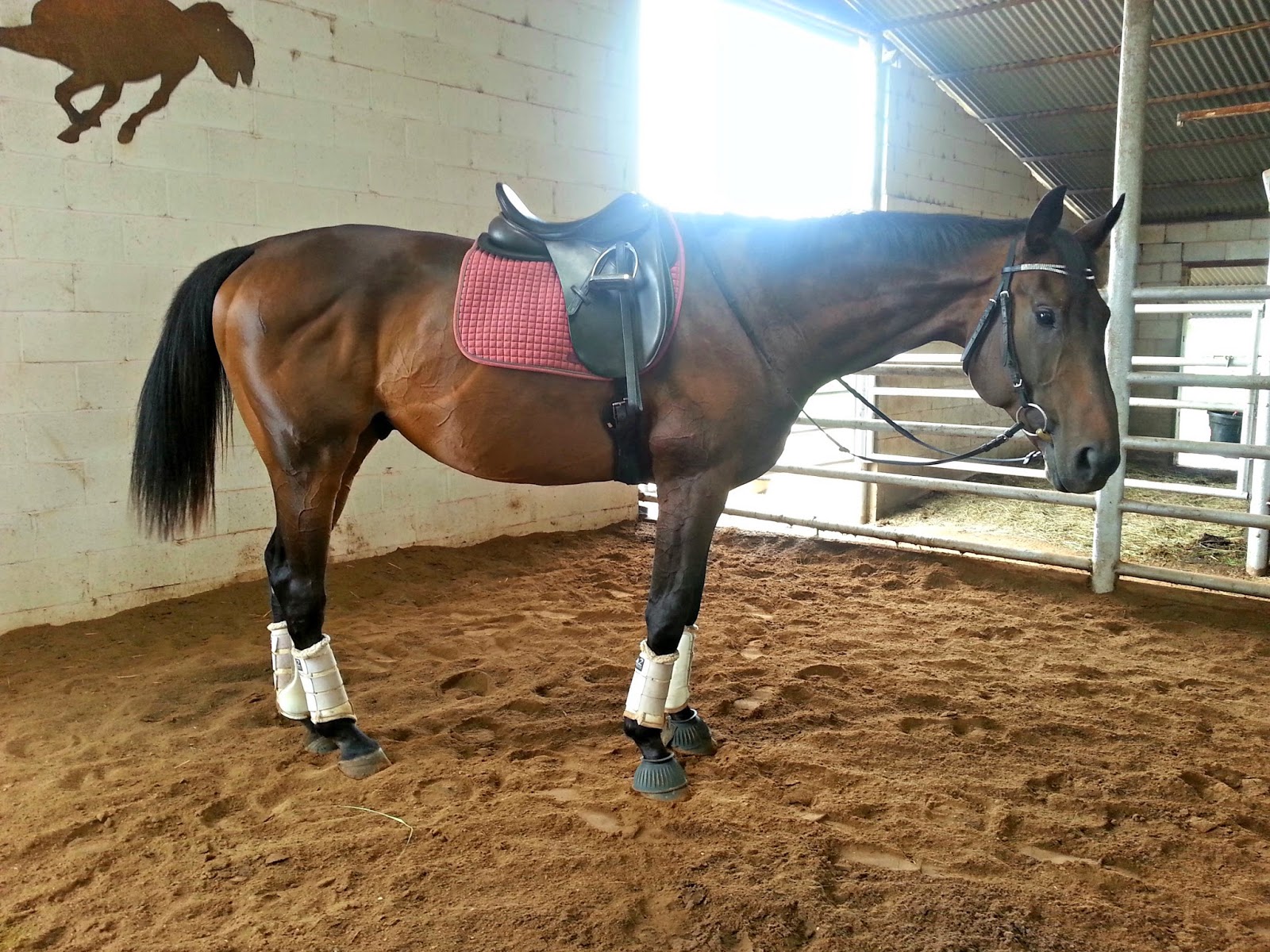 It’s always a little hard to see a horse you love move on to a new person and a new place- you wonder how they’re enjoying their new stall, if their new person is feeding them enough cookies, if they’re being ridden nicely. 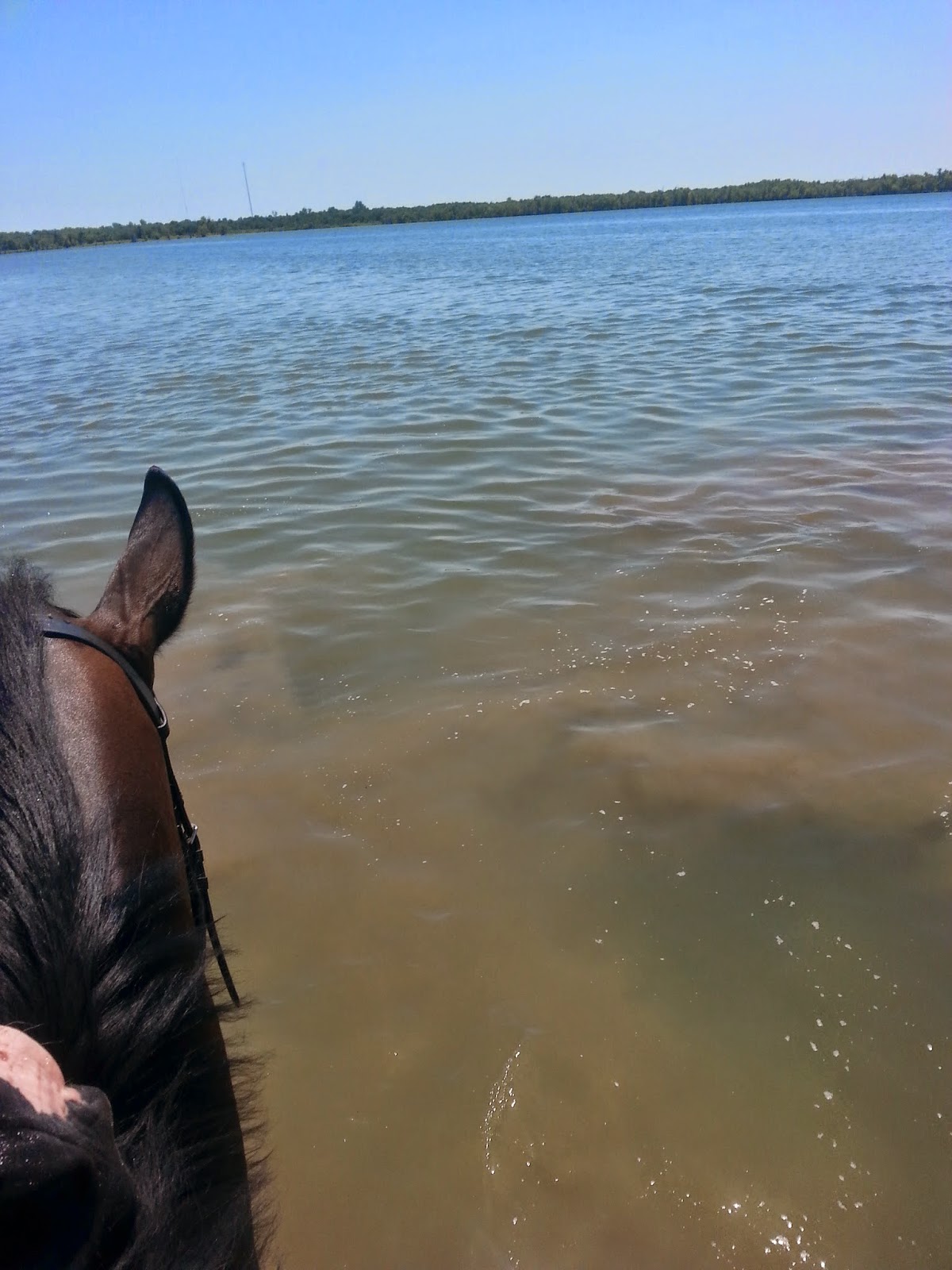 His new owner was nice enough to comment on a couple of my blog entries with some updates on him. He is doing very well and adjusting to life as a hunter (versus an event horse-in-training, haha!) and most importantly, he is well-loved and probably getting massive amounts of cookies. 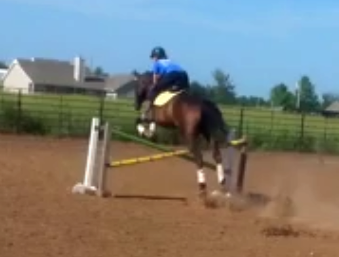 His new owner sent along this video of her riding Carson (now known as Moose)- I think they look super, and wish them many happy and successful years together!

This weekend was pony weekend (but isn’t every weekend?). On Saturday, Richal, Audrey, and I headed to Tulsa to pick up Moe and Gina. After admiring my ingenious tuna can bridle hangers, they helped me load my meager possessions into the trailer. We caught the horses and both of them loaded into the trailer like total pros. Neither horse has ever been bad about trailering, but I am always grateful when they hop right on without any fuss.

They unloaded quietly and were quickly led to their new homes: two stalls with dry lots off the back in the breezy shedrow. They aren’t next to one another- between them is a mare and her cute Paint/Fresian foal. Both horses spent some time pacing and whinnying; Moe was also terrified of the foal. (He’s terrified of all tiny equines.) They settled down after a little while and were munching hay when I left.

On Sunday, I went out to see how they were coping; both horses were turned out in a big field. I rode Gina in the small indoor, just to see how she’d do.

Gina was good; she didn’t spend a whole lot of time looking around or calling for Moe. She put in some really excellent trot work, let me open the gate to the outdoor from her back, and walked around the outdoor arena sanely. (It was a nice change from Fred, let me tell you.) I gave her a good scrubbing after our ride, which she desperately needed. She was grimy with sweat and dirt and general grit. She pulled back once and broke her lead rope (sigh), but I just grabbed the spare in my tack trunk and proceeded as usual.
Monday I rode Moe, who was delightful as always. The minis, Peanut and Charlie, were hanging around in an aisle close to one corner of the arena. Moe was completely terrified of them and spent a few minutes standing completely still, staring at them. He refused to go very deep into the corner (lest a mini attack) and spent the entire ride in the indoor giving the minis some serious side-eye. For their part, the minis ignored him. I took him out into the newly mowed hay meadow and we cantered for a bit; it felt good to have space to run. It also felt good to just ride my favorite old horse. I gave Moe a bath after our ride and turned him out, where he thoughtfully rolled in the grass.
I also rode Freddie on Saturday and Monday. Dear old Fred has pulled her right front shoe again, so we are continuing the ever-exciting walking routine. I rode her in a borrowed dressage saddle on Saturday, which made her feel super downhill. She was good, though, and I felt like I was using my seat and legs better, so we’ll keep it in our rotation. On Monday, I dug out my breastplate to see if it fits her; it does, and she looks extra legit in it.

Fred was good. She’s starting to respond to halt requests more readily and seems to be beginning to understand bending. If only we could keep her shoes on!

One last note: Carson has found a new home! A couple of weeks ago, I accompanied Audrey and Richal to a nice hunter barn in Tulsa who was interested in trying him for their lesson program. They thought he was too forward (again, LOLZ) but thought he’d be a good fit for one of their students. He stayed there on trial, and his new owner recently commented on one of my posts about him that she’d just bought him. I wish her the very best with Carson (who is now renamed Moose); he was one of my favorite horses and I won’t say I didn’t shed a few tears when we dropped him off at that barn.
Back to the work grind today; I hope y’all had a great Labor Day weekend!

First, thank you to everyone who’s chimed in with advice and opinions on the wedding posts! It’s helpful to have so many perspectives!

Onto the fun stuff:

Tuesday, I was itching for something to do, so I headed out to Richal’s barn and immediately set up $900 Facebook Pony‘s zigzag jumping exercise. I set the two end jumps as small crossrails, the middle two jumps as ~2’3 verticals, and had some barrels as standalone jumps off to the sides of the zigzag.

I tacked up Carson, who was much more motivated to move forward in the outdoor arena. He’s a big, heavy boned, warmblood-type Thoroughbred and is a much different ride from nimble, speedy Moe or dainty Gina. Carson feels powerful. His turning radius is approximately equivalent to that of a Mack truck, so the rollbacks were difficult for us. However, he was very eager and willing to go- that’s never a bad quality!

I convinced his owner to get on him and pop him over some fences- she is a dressage rider for sure, but she’s a good sport (and good rider) and put Carson through the exercise with very little trouble. After she’d gotten him through a few times, I raised one of the verticals to a solid 3′. I told her if she kept her leg on and kept him straight, he’d sail over it without a problem. On the first approach, Carson ducked out to the left, but his owner admitted she hadn’t been very committed to going over. On her next approach, she was much more confident in where she was going, and he stepped over it like an old pro!

I was absolutely tickled that he had zero qualms about going over, as he’d never been asked to jump anything bigger than about 2′ until a month ago.

Yesterday, Richal invited me to go on a trail ride at a nearby lake with her, Carson’s owner, and a couple of her eventing friends. We arrived at the lake just after noon, ate a quick lunch, and headed out on the trail around 1 PM. 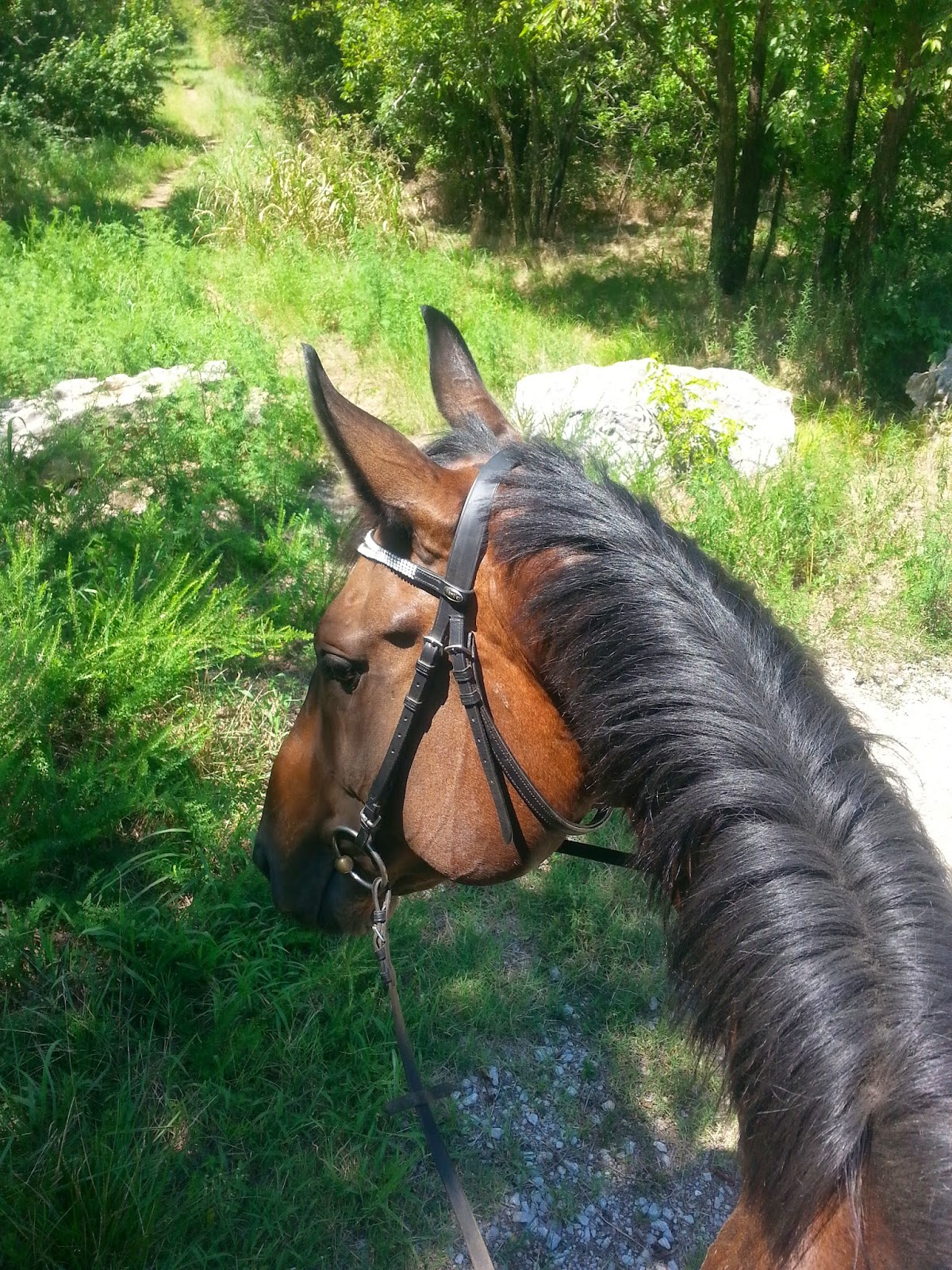 I was on Carson, who’d never been on a trail in his life. He was curious without being spooky and fearlessly led the way for the first half mile or so. I was relaxed and had him on a loose rein while I turned around and chatted with one of the eventers about foxhunting. All of a sudden, he gave a mighty snort, leaped straight up, and somehow teleported sideways. I fell off in total surprise while Carson trotted down the trail. He was eventually chased down (apparently, he just kept trotting along as if he had some destination in mind), but not before he destroyed his reins. One of the eventers offered her curb rein, so I was back in action before long.
The rest of the ride was fairly uneventful- Carson got belly-deep in the lake (on his first time encountering water!), he didn’t mind when the other horses crowded around him, he was content to trot along the trail when everyone else was trotting, and he plodded over rocks, fallen trees, and plowed through branches, sticks, and vines.
It was definitely a fun time and I was happy to meet some more eventers! (I was beginning to think they didn’t exist here.) I’m proud of Carson- from jumping big jumps to handling the trail, he was a superstar this week. Onto cross country next week (hopefully)!

For a few months, I’ve been accompanying my friend Holly to her riding lessons; she rides at the barn of local dressage queen and mutual friend Richal. I’m always happy to go, because Richal seems to have an endless variety of horses who need to be ridden and a slew of barn rat children to fetch horses, muck stalls, and even untack horses. It’s like paradise sometimes.

As much as I enjoy hanging out with my horses, I really love the social element of riding. Horse people understand horse jokes, encourage you to lay on the Theraplate because it’ll totally loosen up your back, and don’t judge your disgusting fingernails. It’s something I’ve missed at the barn where Moe and Gina currently live; I rarely see other people out there. I’ve only ever seen two other people ride.

For the last month or so, Richal’s right-hand (wo)man, Audrey, has let me pack around on one of her Thoroughbred geldings, a gigantic bay horse named Cascade Carson. Carson is 7, has been off the track for 3 years, and is very lovable and pleasant. If I could afford to board another horse, I’d buy him, as Audrey doesn’t ride him often and prefers her other mount Mojo.

As it is, Carson and I have been having a blast for the last few weeks. I hauled my jumps out to Richal’s place last week (as I plan on moving my horses there by the end of August) and Carson happily zoomed around a 2′ course with zero problems, even hopping over some crazy colored barrels. Today, we worked on dressage in the indoor arena; he tries very hard and I have the feeling he could turn into a very fancy horse.

I’m hoping to take Carson to an event derby in early September- provided, of course, I can find a trailer. (Which I don’t think will be a huge problem this time.) I think he’d make a good eventer, and I always enjoy getting horses new to the sport around courses.

I haven’t forgotten Moe and Gina; Moe is being ridden a few times a week by my student. I’ve been hopping on Gina about three times a week. I’m looking forward to moving both of them to Richal’s at the end of the August (the barn’s policy is for boarders to give a 30 day notice before leaving), where I know they’ll get good care and I’ll have some friends to ride with!