I’m swapping one bay mare for another at this weekend’s combined test. Instead of taking Freddie, I’ll be taking Gina!

Fred’s always had a pretty minor little hitch in her giddyup. Richal and I have been ignoring it because Freddie has about 123098 issues that could be causing it. She’s a hideous paddler, which sometimes tricks onlookers into thinking she’s taking a funny or lame step. She’s ouchy when barefoot. She enjoys removing her shoes and gimping around. Sometimes she’s stiff. The hitch doesn’t manifest constantly or consistently. Sometimes it gets better after she’s warmed up. Sometimes it never appears. But Fred never acts uncomfortable and never takes a head-bobbing lame step.

Now that Freddie’s been in consistent work for a couple of months and kept her shoes on for a full shoeing cycle, you’d expect the hitch to maybe resolve itself. But it hasn’t. On Monday evening, Fred was looking just off enough that Richal didn’t feel comfortable taking her to a show this weekend. No one wants to be excused from the ring for riding a lame horse or start the rumor mill going that their horses aren’t well cared for. So Baby Fred’s eventing debut will have to wait until Mystery Hitch is resolved.

Hitch or no, I saddled her up yesterday and went on a short trail ride with Richal, who was on the giant freak-of-nature Tennessee Walker/Friesian Goliath, and one of the students on a saintly five year old Appaloosa named Andy.

I was super impressed with Fred, who was unfazed by cars driving past, neighbor horses cantering by in excitement, and dogs barking. She went up and down steep embankments, listened to me, and walked over telephone poles. Goliath was busy spinning in circles and making Richal’s life miserable; Freddie was unconcerned. She didn’t mind when poky Andy had to trot to catch up with us. The only things that got a couple of little spooks out of her were a truck pulling an empty trailer rattling by and a dog that ran up to a fence and started barking (the fence was to her back). I always knew she was a basically sensible creature.
I’m looking forward to taking Gina to the combined test- we’ll be doing Green As Grass, as I didn’t want to make the event organizer’s life difficult by switching divisions; plus, we all know Gina isn’t the most reliable horse over fences. I think a course of 18″ cross country jumps will be a good confidence builder for her. Hopefully we’ll have a good time and finish on our dressage score! 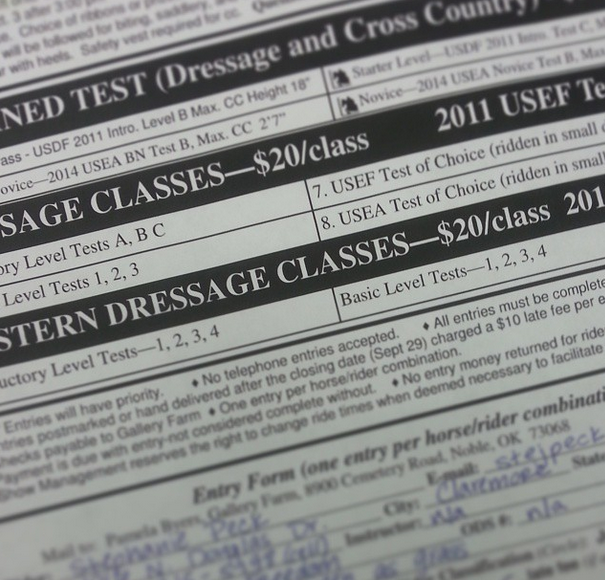 I’ve officially entered myself and Baby Fred (proudly entered under her Jockey Club name of Expect Freedom) in a combined test at Gallery Farm next weekend.
We’re entered in the Green as Grass division, where the dressage test is Intro B and the maximum XC height is 18″. I’m confident that Freddie will be just fine if I can keep myself from getting very nervous. It’s been years since I actually competed in any kind of show, and I’ll be riding a super greenie!
Fred’s had a great week of work though, with a pretty calm trail ride, more cantering without bucking, and even a little baby cross-country jump. This show seems like the perfect, low-key opportunity to make a debut.

I flatted Freddie in a dressage saddle last Friday morning. This particular saddle is a Wintec that’s on loan from Richal’s sister. It’s a nice enough saddle, but way too slippery and way too small. However, it does help me keep my legs and seat in a more appropriate place for dressage, so in that way, it’s a vast improvement over doing dressage in my cross-country saddle. The only notable thing about Friday’s ride was that Freddie cantered an entire lap around the indoor arena without bucking. Y’all, I just about fell off, I was so excited.

Since the Fred and I have been dressagin’ exclusively on our early-morning rides, I thought we could both use a little change in routine over the weekend. Johnny came to the barn and we set up four little crossrails in the outdoor arena. Johnny also assisted in grooming Fred; he brushed her mane and tail and commented that she looked like a big dork because her super-thick mane parts down the middle.

Freddie was super riled-up and raring to go. She spent a few minutes jigging around the indoor before we went outside, where she walked pretty calmly for most of one lap before jigging some more. I just about had to stand on her head to get her to stop.

I settled her onto a big circle and got her to walk quietly in both directions for a few minutes before asking for a trot. Surprisingly, she trotted beautifully all around the arena, circling and changing directions like she was an old pro.

I trotted her over all the crossrails several times and was impressed by how well she behaved. She was initially a little hesitant, but with some leg and a cluck for encouragement, she hopped over all the jumps without a problem. She improved as she went- she felt far more confident by the end of our ride. Johnny dutifully reset the few rails we knocked; I was pleased that Freddie didn’t scare herself knocking them down, or get spooked by Johnny resetting them. (Gina could learn something here…)
And, get this y’all: little baby Freddie cantered away from 90% of the jumps without bucking! Hooray! Toward the end of the ride, she bucked a couple of times coming off a jump. It felt like she just had so much momentum going that she didn’t quite know what to do with it all upon landing. I am very optimistic that as she becomes stronger and more balanced, she will stop bucking.

Maybe baby Fred and I really will have a good show next month!

On Saturday, Freddie and I hitched a ride to a local dressage schooling show. We didn’t compete, but I felt like I couldn’t pass up the opportunity to get her out and about away from home.  It was cold over the weekend- Saturday morning was 52, overcast, and windy- and I was a little apprehensive that Freddie would be feeling exuberant and try to murder me once I climbed on.

She loaded and unloaded from the trailer like a pro, but seemed totally bewildered by her surroundings at the farm where the show was held. (Trailer parking was in the middle of a tree-filled field.) But she stood tied to the trailer pretty calmly. The stuffed hay bag in front of her probably helped.

Five of Richal’s students were competing on three of Richal’s horses, so we spent the morning hustling around, grooming and tacking horses.

We all headed to the warm up ring once the ponies and kids were ready; I was on foot leading Freddie, and we were accompanied by one of the students riding Training level later on Sundance. The four of us stood outside the warm up area; Sundance grazed and Freddie circled around me nervously. When the warm up ring cleared out, I walked Fred around in it. She was unimpressed for the most part, although some drainage pipes gave her a start. After her very minor spook, she settled down and took advantage of the grass.

We watched some of the kids’ tests. Freddie paid very close attention.

After lunch, we headed back to the trailer for some food. We tied the horses up in front of their hay bags, offered them some water, and settled down to enjoy horse show staples like granola bars and goldfish crackers. All of a sudden, there was some commotion on the other side of the trailer: a squeal, some clattering, and some thudding. Richal and I dashed over to see what caused the ruckus. Freddie was nonchalantly eating her hay, while adorable gray pony Max was staring at her, bug eyed and holding up his right hind leg a little. Freddie had nailed him right in the stifle!

Thankfully, Max walked it off just fine and went on to put in two nice Training tests for his young rider. I saddled up Freddie shortly after that; she was totally bonkers for a few minutes, bouncing and jigging and generally trying to zoom off with me. Once she got in the warm up ring, she was a good bit better. She doesn’t mind being close to other horses, or other horses getting close to her. She wasn’t frightened by any noises or sights. She walked and trotted very quietly in the ring- Richal joked that Freddie looked like she was impersonating a western pleasure horse as she shuffled along. The only bit of ugliness was when I asked Fred to canter- she let out two or three mighty bucks, but since she occasionally does that at home, I wasn’t overly concerned. (She is also a ridiculously easy bucker to sit.)
A few people complimented Richal and me on how well behaved Freddie seemed for her first time off her home property, so at least we didn’t embarrass ourselves. I was very proud of her; I guess all that hard work on walking is paying off!
I’m also proud of all the kids; they rode well and one of them even brought home the high point award!
The next schooling show is in early October- I’m hoping Freddie will be ready to do an Intro test, but if not, she’ll at least be along for the ride.
Last Friday, I rode Freddie in the outdoor arena for the first time since she had her meltdown. Richal had set up a dressage-sized arena within the outdoor, so I was able to keep to Freddie contained (sort of). I was really proud of her- she didn’t act like a fool! She walked relatively calmly and halted quietly several times.
Freddie had her hooves trimmed and her missing shoe replaced on Tuesday. Yesterday morning, I headed to the barn bright and early to see if Freddie remembered how to trot.
I stuck my running martingale on her mostly to see if it’d help me emphasize half-halts, which Fred typically ignores. We headed to the outdoor arena, where the dressage arena was still set up. Freddie walked quietly for about five minutes, then started jigging anxiously. I tried my best to sit quietly and stay relaxed; I gave her a half-halt any time she moved faster than a walk. Freddie escalated from jigging to pogo-stick trotting. I pushed her forward into a real trot. She flailed and went faster. I half-halted. She started the most awkward canter ever. I grabbed the breastplate’s handy neck strap when I felt her hump up her back; fortunately, she was just performing a very uncoordinated flying lead change. (Yay?)
We eventually settled down and onto a 20-meter circle. After she walked quietly in both directions a few times, I asked for a trot. There was minimal zooming, and for the most part, she trotted her smooth and slow trot. I circled her maybe three times each direction and called it quits.

I’m headed to ride after work today; let’s hope baby Fred remembers the happy part of yesterday’s ride, when I was scratching her neck and telling her “Good girl!”, not the part where I was mumbling rude things about her intelligence and parentage while she careened around the arena…