It was a pleasant, relatively cool evening for late June. Walking away from my car, I glanced over my shoulder as I hit the lock button on my keychain and saw a Target looming just across the street. The steady drone of city traffic hummed behind me.

I was at Fair Meadows, Tulsa’s horse racing track.

I was accompanying my friend Holly; she was there to get photos for her book on media technologies and horse racing. I was there to watch a few Thoroughbred races and see the track. It’s been in the news over the last couple of years, as there’s been an intense fight to stop live racing there. It’s a complicated issue involving Native American tribes, casinos, and money. I was curious to see the place; for all the times I’ve been to Expo Square, I’d never seen the track.

Fair Meadows is in the heart of Midtown Tulsa, wedged between the fairground buildings of Expo Square and the derelict baseball stadium of the Tulsa Drillers. The walkway to the track meanders under the rusty beams of the grandstand. Faded, chipped signs direct patrons to different seating sections and boxes. Ticket booths from the state fair are repurposed as betting windows. The path to the track passes the paddock, which is a small covered area where the saddling areas are separated by squat cinder block walls with spray painted numbers.

Perhaps the most appalling and startling part of Fair Meadows is its infield: an asphalt parking lot with a few sparse, sickly-looking shrubs amid the light poles and heavy equipment. The whole place couldn’t be less like its lovely name. 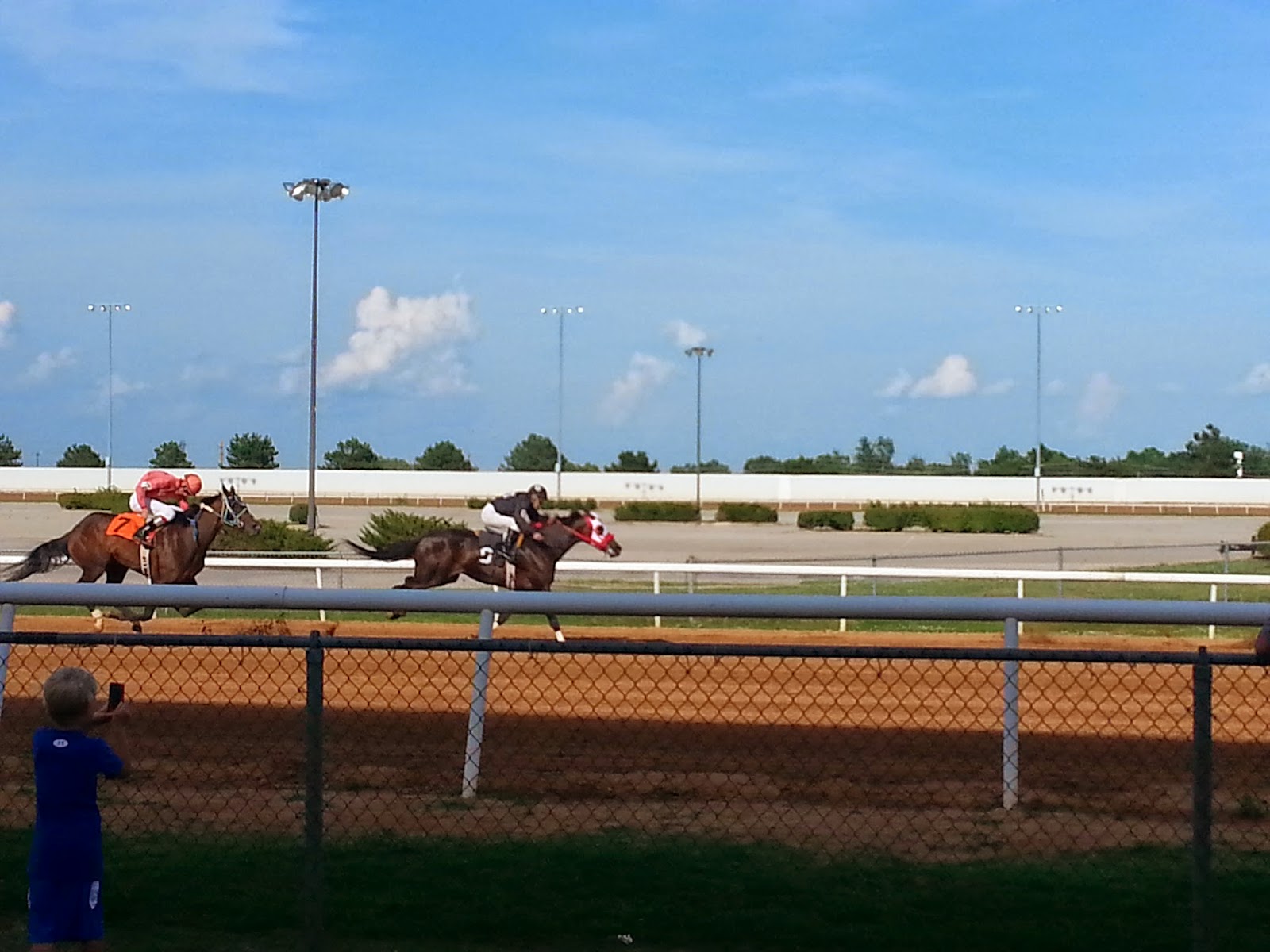 Holly and I took our places near the rail, where bored children milled around between races while their parents pored over tip sheets. Jovial track regulars joked with one another about the weather and the money they’d won and lost.

Most of the races on the card were $5,000 claiming races with horses running for a $4,500 purse. I felt sick watching 9 year old horses chug around the track against a backdrop of shimmering pavement and low-end department stores. Holly commented that of all the tracks she’d visited, Fair Meadows made her the most nervous. It seemed like a place where horses break down. 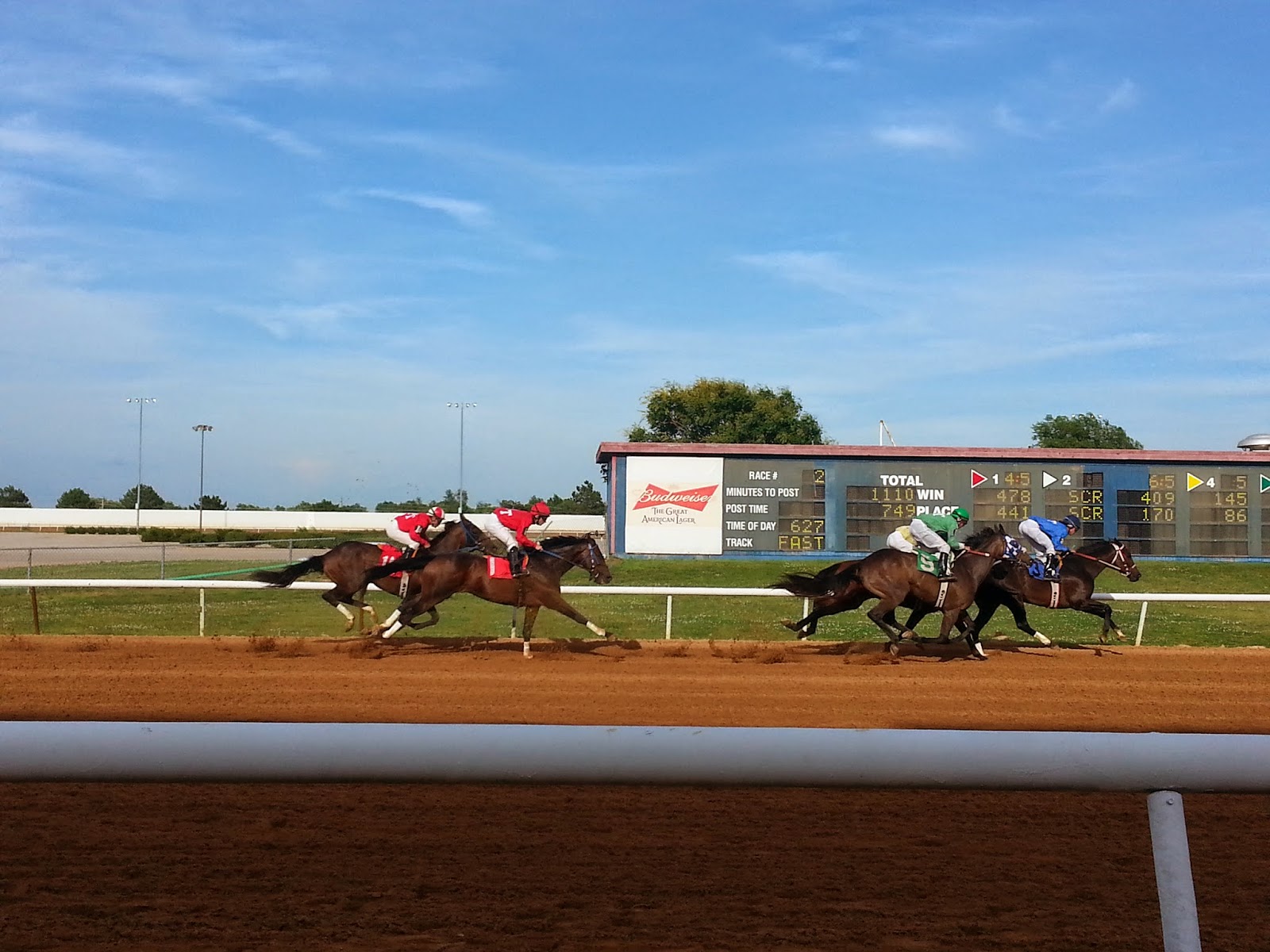 Holly was interested in the allowance race with a $14,000 purse- high stakes for Fair Meadows. She said there were some well-bred horses running, too. It was a slow race, but the shining horses roaring past the finish line were as full of themselves as if they’d just won the Kentucky Derby.
After that race, we headed inside the simulcast building to eat and get photos of the technology. It turned out to be several very large TV screens and many small monitors tuned to different tracks. The area had the feel of a seedy bar crossed with a restaurant that hasn’t seen a style update since sometime in the mid-1990s. The food was mediocre, the service unimpressive. Other than spending time with a friend and admiring beautiful horses, the highlight of my night was winning $7.80 on a $2 bet. 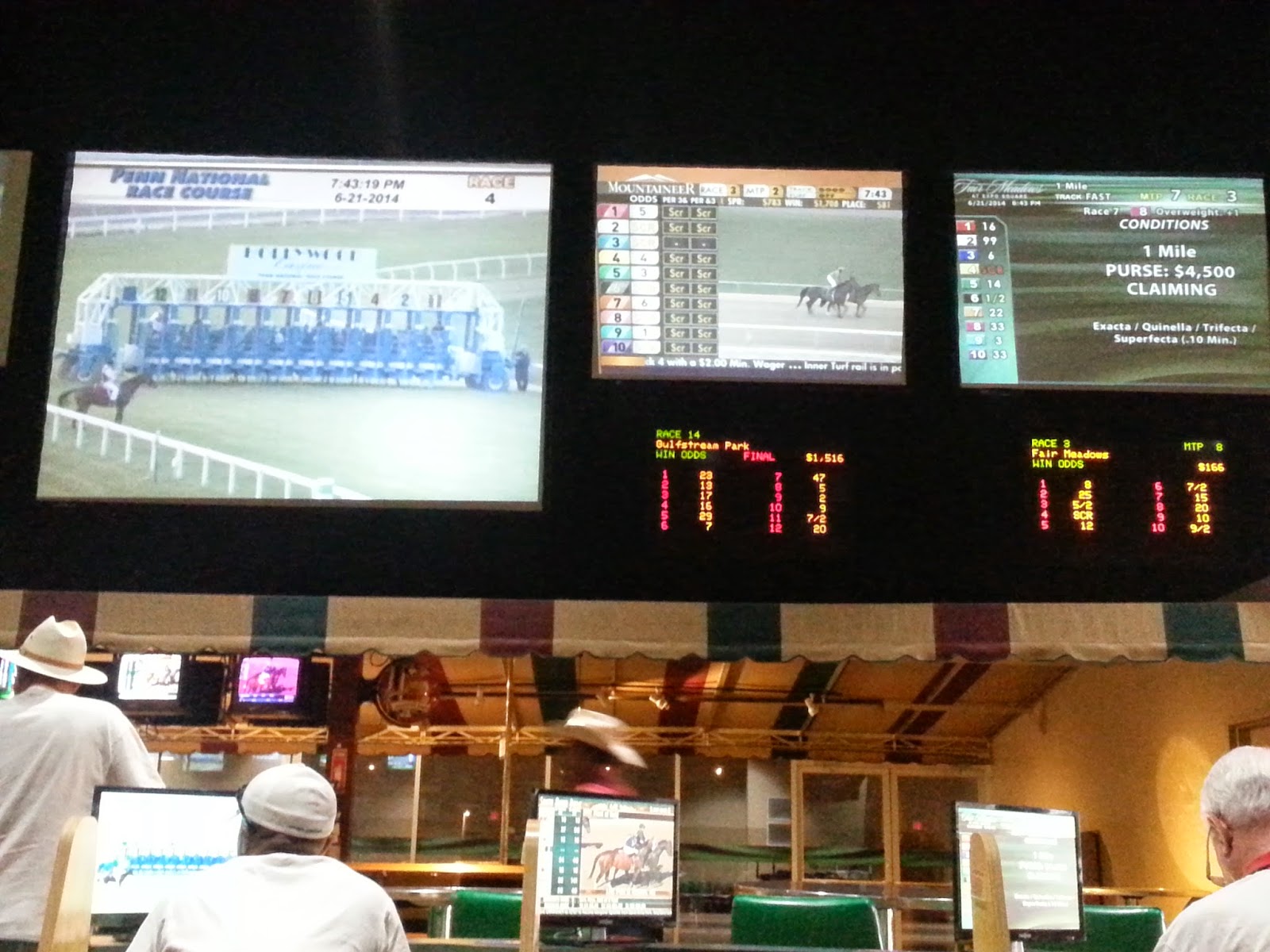 Fair Meadows wasn’t always like this. Built in 1989 at a cost of $4.5 million dollars, it opened in September 1989 with a stakes race. For years, the crowds on race nights regularly topped 5,000. The record for attendance was 14,000 for one night of racing. Admission ranged from $2 for general admission grandstand seats to $150 for boxes. Reservations were required to park close to the track. Tulsa’s oil-rich elite held boxes, and races were great social affairs. Top quality horses and jockeys were attracted by stakes races with big purses.
Newspaper articles from the ’80s and ’90s laud the effort put into building and maintaining such a track and covered the racing with excitement, seeing the future of the horse industry in Tulsa (and Oklahoma in general) on the upswing. After all, it’s an industry that currently contributes nearly $500 million dollars to the state’s economy, according to a 2013 study from the Oklahoma Equine Alliance.
Over the years, agreements with various Native American tribes led to the prohibition of slot machines at the Tulsa track. The tribes agreed to pay the county-owned track around $2 million dollars per year, presumably to keep the gambling populace in the area’s suburban casinos. With betting available at many of the area casinos, people had little reason to wager at Fair Meadows. Live attendance had been in decline for years; speculation on the reason for that is for another day. So with few attendees and few bettors, Fair Meadows has been let go. Racing for 2014 is obviously happening; the future is anyone’s guess, but it’s not looking good.
Fair Meadows may one day die an ignominious death. But somehow, the death of a once-celebrated racetrack is a less depressing thought than that of a 9 year old claimer laboring through another race.