I went down to the barn yesterday with every intention of longeing Gina. I gave her Wednesday and Thursday off, as she felt a little tired when we jumped on Tuesday. She greeted me in the pasture, walking up and snuffling for cookies.

And then I noticed her left hind leg. 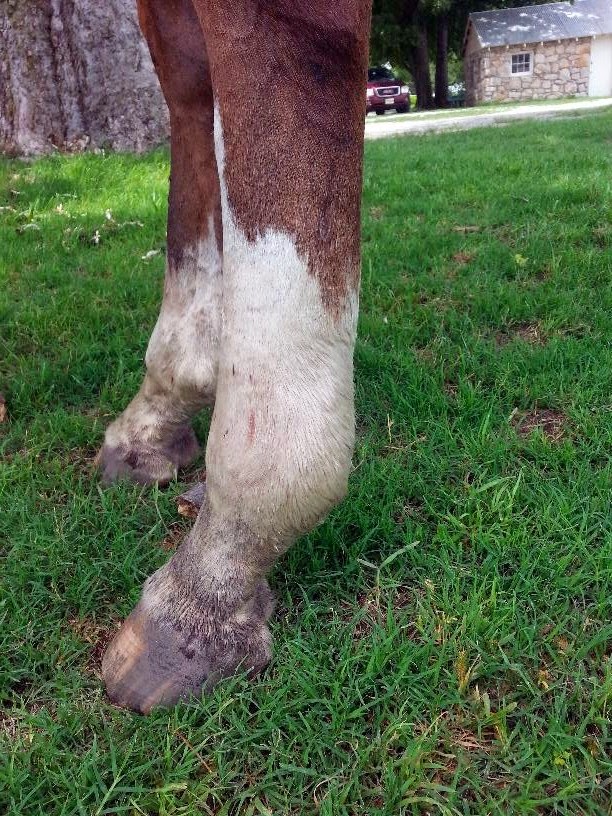 It’s super fat! I brought her in to poke and prod it. The leg is swollen and hard, with no visible injury or trauma to it. (Just fly bites and a few little scratches she’d had Tuesday- presumably from sticks or twigs that jut out of the undergrowth near the pond.) It has very little heat. I threw her in the round pen and watched her trot for a few minutes- she’s totally sound. She grazed placidly while I handled her leg and didn’t behave as if it hurt.

I cold hosed it for 10 minutes (during which she continually stomped flies with a front leg, splattering me and the side of the barn with mud) and applied some liniment and kicked her back to the pasture.

I don’t know what’s wrong with the leg. It’s been very rainy all week; maybe she slipped in the mud? Perhaps she bumped it on something? Who knows. I’ll be back out this afternoon to check on her before cheering on California Chrome at the Belmont; in the meantime, I guess Princess Pony is on an extended vacation! 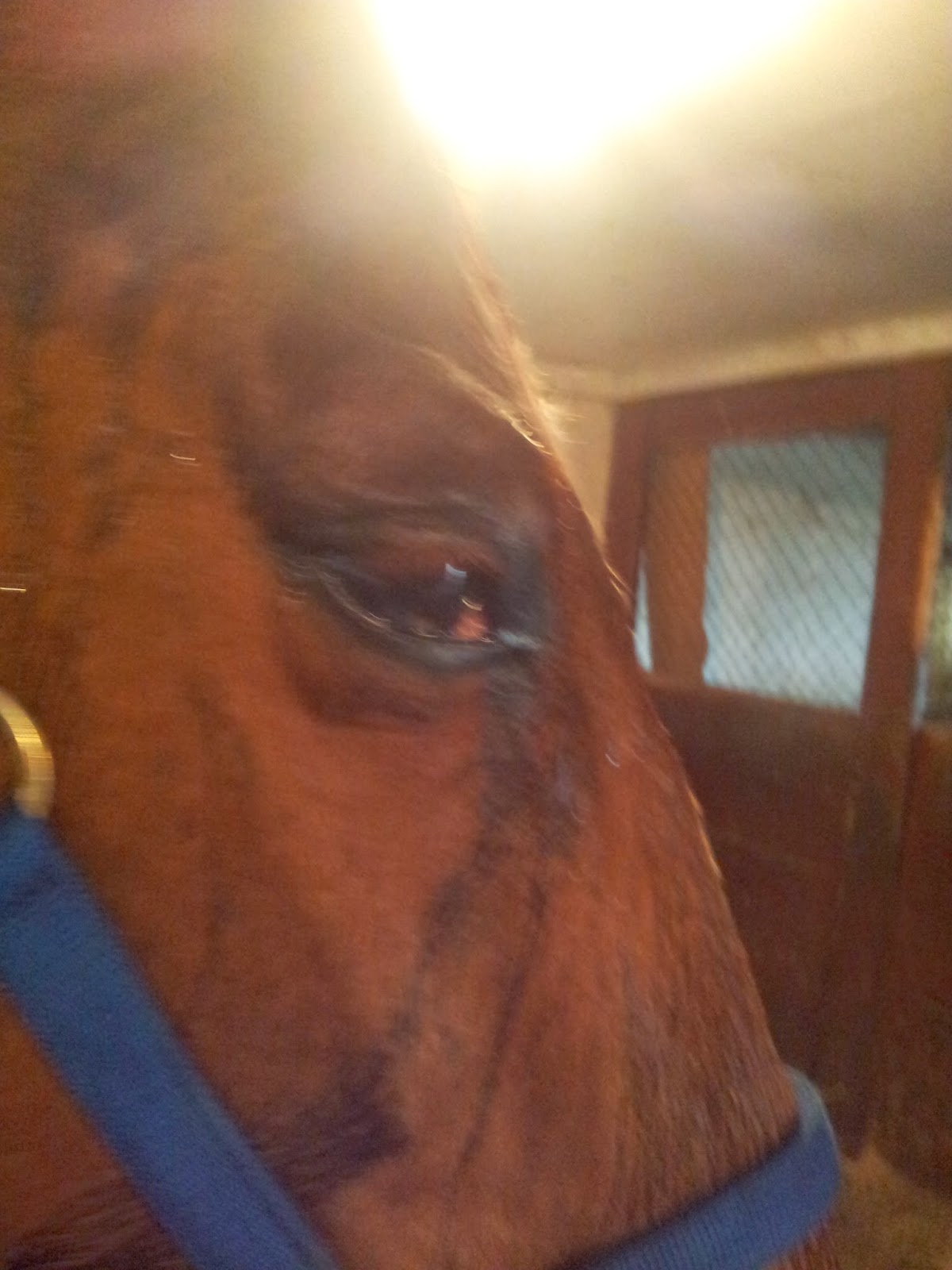 By ‘it’, I mean an ulcer. And just in the right eye.
I received a call from the barn manager yesterday morning telling me that Moe’s eye looked worse than it had. (Over the weekend it was looking totally normal.) He said Moe was holding it almost completely closed, and there was a lot of discharge. I drove down there, took a look at it, and called the vet. I waited for about an hour, then decided to drive home and come back down when the vet was available to meet me; his office had told me he was tied up with several emergencies. Not one minute after I exited the turnpike for home did I get a call from the vet asking if I was able to meet him for an exam. I made a U-turn, paid the toll again, and went back to the barn.
After examining the eye, my vet informed me there was a small ulcer on the cornea. He guessed it had been caused by some type of trauma: a poke, a scrape, a bump, etc. He gave me some eye drops, an antibiotic ointment, and some Bute and advised me to keep Moe stalled during the day with a fly mask on.
For the most part, Moe’s been taking his treatment like a champ. Twice daily eye ministrations aren’t fun for either of us, but he’s cooperative as long as I don’t take too long to pry his eye open. The eye already looks much better- Moe is opening it all the way and there’s less discharge. He’s less pleased with stall confinement and pouts and whinnies constantly. However, he’s taking advantage of everyone who’s in and out of the barn; when I came back in from riding Gina today, he was smacking his apple-flecked lips and there was clear evidence of a chewed-up carrot on the floor. And that’s nothing compared to the staggering amount of treats I’ve been stuffing down him!

Over the last couple of weeks, I’ve been a little concerned about Moe’s right eye. It’s been just a little weird. Not “freak out and call the vet” weird, but “watch it and see what it does” weird.

He hasn’t been opening his right eye quite as wide as his left. The right eye is more watery than the left, but the discharge is thin and clear; there’s no thick mucous or scary colors. The eye appears to have a touch of cloudiness in it, but that’s been there for at least a year and my vet didn’t think it was a problem. Moe’s eyelid and eye area don’t appear swollen or inflamed. While he isn’t keen on me touching it and attempting to pry his eyelids open, he isn’t thrilled about that treatment on his good eye either.

I’d hazard a guess that he can see out of it. Transitioning from the sunny pasture to the dim barn and back again doesn’t seem to bother him. He’s jumping exactly as he’s jumped for the last 11 years- no funny distances, no hesitation, no drifting.

Today, I dragged my 38-weeks pregnant friend Trista down to see the eye and get her opinion. Trista is a practical person with worlds of experience dealing with equine and bovine issues. When she called me today to ask if I could give her directions to Whole Foods so she could pick up some special pine tar soap for a pregnancy-related itchy rash, I offered to drive her there if she’d look at Moe’s weird eye. (Evidence of Trista’s practicality: when she was told this soap would help, she first searched her horse trailer to see if she had any pine tar hoof dressing. Hardcore.)

Of course, just when I brought in a second opinion, Moe’s eye appeared completely normal. A little watery, but I chalked that up to the 35 MPH wind gusts today. Trista’s opinion was that Moe had something a mutual friend’s horse had suffered from last summer: some kind of virus. The friend had the vet out to check, as she thought it might be moon blindness. The vet (who is also my vet) told her the horse had a virus and advised her to just let it run its course. The horse is totally fine and hasn’t had any problems since; the virus cleared up on its own after about a month.

So here’s my question: anyone have any thoughts on eye ailments? I’ve been reading articles on Equine Herpesvirus-2 keratitis, moon blindness, and cataracts; Moe’s symptoms seem to be a closest match for EHV-2 keratitis. Anyone have any experience?

It’s been about six weeks since my arm surgery (open reduction internal fixation surgery, to be exact), and I am happy to report I’m doing really well. I returned to work about 4 weeks ago and have been teaching lessons and doing as much horse stuff as I can. While I’m not totally comfortable leading horses (because if any of them are jerks and yank the lead rope out of my hand, I feel it pull on my gross metal stuff), I’m fine grooming, adjusting stirrups, tightening girths, etc. The horses are work are so quiet and so elderly that I don’t think they’ll do anything wacky.

I had a doctor’s appointment today; unfortunately, I don’t have the x-ray. My arm is currently healing correctly, but slowly. The space between the two parts of the bone has widened, and the bone is modeling. Basically, the bones are growing a new batch of bone between them. My doctor upped my weight restriction to 10 pounds, which means I can go back to feeding the horses without concern. However, I’ve again been given strict orders not to ride until the bone is fully healed, which will be in about four months. Needless to say, I am very disappointed. (Although this time I managed not to cry in the Tulsa Bone & Joint parking lot.)

I visited the ponies on Wednesday. They are all very fuzzy and came running right up to me. I’d like to think they were glad to see me; Moe probably was, but I’m sure Colt and Gina just thought it was dinner time.

Colt might be returning to his owner; since I am unable to ride him, he isn’t really doing much out here except eating grass. I don’t think his owner will do a whole lot with him, but that’s none of my business. I’ll be sad to see him go.

I’ll be glad to get back to feeding and seeing my ponies regularly! It’s depressing to think of not riding for a while, but it IS nice to see their fuzzy faces.

I had my post-surgery follow up appointment with my doctor today. He had a new x-ray of my arm taken, and I snapped a photo of it. 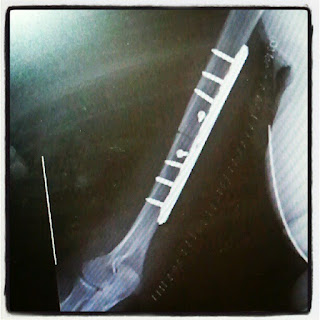 The amount of hardware in my arm is staggering and more than a little unnerving! Even more unnerving? My doctor shared with me that he almost needed to go the next size up on the plate that’s in there! Yikes! If you look closely, you can also see the staples along the back of my arm. (They were removed today.)
I wish I had a picture of the pre-surgery x-ray to share. You can see in this photo where the fracture is; before the surgery, there was a chunk of bone floating where the plate currently sits, and the space between the fracture was a couple of inches. This picture is a much better one.
For the time being, I am confined to lifting 5 pounds of less and not using my arm to push. That means I’ll be back at work doing what few office-type things we have soon and working on a major fundraiser. Unfortunately, the bone is going to take about four months to heal and I am not cleared to ride before then. Needless to say this is a major disappointment. When I think of missing the fall hunter pace and how well Colt was progressing…But I’d rather be back at 100% than re-injure the arm. (Or at least that’s what I’m telling myself.)
In the meantime, I’ll be doing some physical therapy and hopefully resuming my quest to complete a 5K!