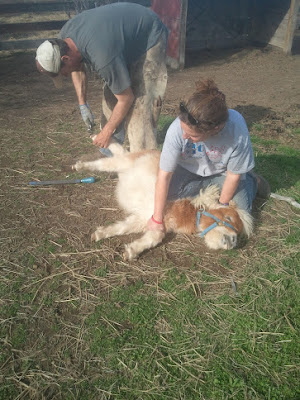 Don’t worry, no minis were harmed in the making of this photograph! This is Lacy, who’s about a year old and refuses to stand while her hooves are trimmed. I laugh uncontrollably when I’m lucky enough to be around on mini trimming day because Lacy looks so ridiculous. After the farrier is done, she hops right up, shakes herself off, and goes on with her day.

It’s been a dressage sort of week for G and me. We met with Anne Wednesday and today to work on transitions. Even though her transitions aren’t bad, both Anne and I agree that they could be better. Besides, transition work is fantastic for building strength. So good all around!

Wednesday I rode in the dressage saddle- have I mentioned the dressage saddle? It’s Anne’s old saddle, a beautiful Passier. Words can’t properly describe how amazing it is; it’s soft and supple, fits G perfectly, and is quite possibly the most comfortable saddle ever made. And it puts my leg in just the right position for dressage work (which is kind of the point of a dressage saddle, I suppose). Anyway. Riding in the Passier makes dressage work that much better, since I can better utilize my leg and seat. We rode for about a half hour, working mostly on trot to halt and halt to trot transitions. Gina decided she knew what was best and would immediately back three or four steps after halting. I’m guessing this is a habit from being shown hunters for years. We eventually had a very nice collected trot to halt and a decent halt to trot, which made both Anne and me very pleased. The best part of the ride by far was taking her at a walk and trot over the ground poles. She was happy and relaxed and really seemed to enjoy the opportunity to stretch her neck and back out over them. What an improvement over last week!

Today I saddled G in the all-purpose (a Regent on loan from the equestrian center, since a former polo teammate decided to keep my old saddle on permanent loan) and we did a lot of canter work. G’s definitely stronger to the left than the right, but she put in excellent work in both directions today. We worked in a figure eight for most of our ride, circling two or three times and then performing a simple lead change in the middle. She had some really beautiful changes and stayed lovely and collected on the rail, too. I’d moved a set of jump standards out next to the last ground pole in our line, so Gina took a good look at it while she was stretching over the poles. She gave them an anxious look, like she was thinking What are THOSE doing here??, but walked very quietly over the poles in both directions while I had my feet out of the stirrups and the reins on the buckle. After one look at the standards she was totally over them.

Today’s Gina-quirk-of-the-day was my dog, Buttons. Buttons is a little half Corgi, half miniature Daschund mix puppy who’s about 5 months old. I take her to work with me sometimes, but today was the first day she’d be out and about while I rode. She trotted right along with G through our entire ride, until we started cooling out, walking and talking to Anne. Buttons got a little overzealous and nearly got stomped/kicked a couple of times! Gina was surprisingly chill though, even when Buttons jumped up and nipped at my foot! She bounced off G’s front leg and G did nothing but snort and stomp her hoof. Totally nonplussed. When I dismounted, I took off my helmet and buckled it onto a stirrup. All of a sudden, G started, spooked, and galloped off in a frantic circle around the arena, apparently put off by the helmet bumping against her side! She was eventually caught and calmed down, but Anne and I couldn’t stop snickering. What sort of horse is fine with a dog jumping around it but not with a helmet on its side? Funny mare.