Let me preface this post by saying that my dad is not a bad guy. He is not a mean guy, or a neglectful guy, or really even an especially horse-ignorant guy.

But he is not really a…thorough horse guy. While he took adequate care of Moe during the three years he was there (by which I mean, he fed him somewhat appropriately, made sure he had fresh, clean water, and trimmed his hooves), he failed to do some tasks I’d classify as basic horse care. Such as grooming.
This was Moe’s tail yesterday afternoon. 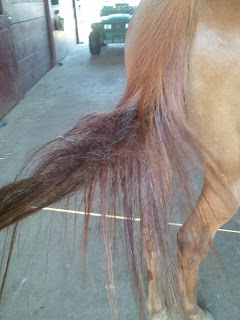 It was a big, tangled, knotted mess. The knot was below the tail bone, where it hung in one huge mass. When Moe swished his tail to get at flies, it moved in one big lump. 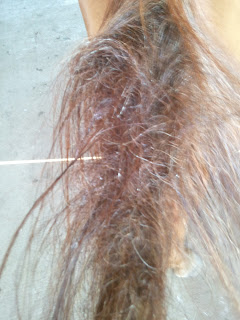 I feared I’d have to cut the entire thing out, which made me fear that Moe’s poor, sad tail would never grow back. When you get used to a horse with a long, luxurious tail (Gina), you just can’t have some poor little horse with nothing back there. Seriously.
So I got out my metal wide-toothed comb and bottle of Vetrolin and started brushing. The real problem turned out to be cockleburrs wedged throughout the knot; a little Vetrolin and a lot of brushing got them out eventually. I think I picked twenty of the wretched things out of Moe’s tail. It took me half an hour and a quarter of a bottle of Vetrolin, but I was successful in my mission: 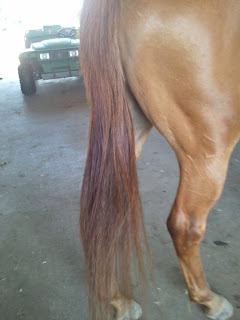 Moe now has a shiny, clean, tangle-free tail with which to swat flies! I don’t know how excited he is about it, but I like to think he appreciates my efforts.
After I cleaned up his tail, I rode. It was breezy and relatively cool. We spent most of our time walking and trotting, which seemed to bore Moe to no end. He spent our entire ride looking at the broodmares, the tractor in the arena, the round bales outside the arena, the three horses in the field adjacent to the arena, and a bird that had taken up residence in the arena. He mouthed his bit and tossed his head. I tried circles, serpentines, changes of direction, transitions to no avail. Moe was very, very bored. Finally, I relented and let him canter around for a bit- we only did four 30 meter circles (2 in each direction), but it was enough to make him happy. For an older, out-of-shape horse, Moe sure is eager to get back to work!

Moe is the best, cutest horse in the entire world.