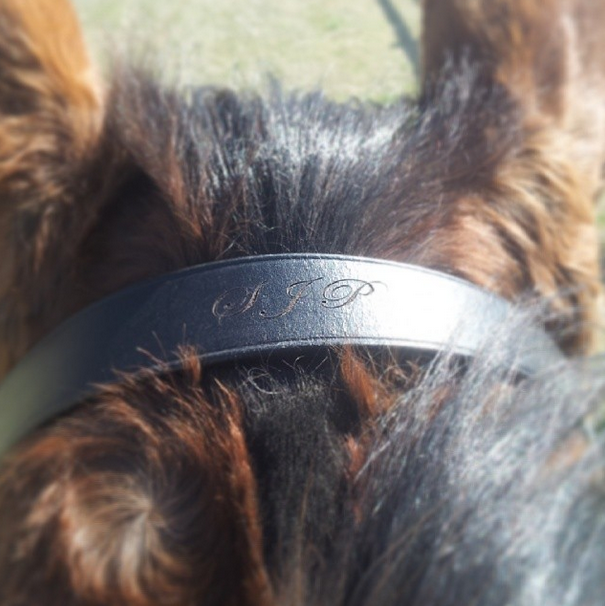 I went out to the barn yesterday planning to do a transition-heavy dressage school on Moe. I did- it was very unexciting. I don’t even think Moe’s #1 fan Elizabeth was impressed. Dressage just isn’t exciting when you’re simply trying to remind your horse that downward transitions shouldn’t be a downward spiral and that the working walk is a thing.
Gina was feeling friendly when I turned Moe out and deigned to accept a few treats in the field. I caught her before she could flee and decided that she and I were going to have some fun. (There’s no fun like forced fun, right?) Since someone had parked a grill in front of the tie rack, I took Gina inside the barn and cross-tied her.
You might wondering what I was thinking, given that I’ve avoided cross-tying her since I’ve owned her due to an unfortunate freak-out, flip-over accident before I bought her.
I was thinking that the ceiling is too low in the barn to allow her to get far if she reared. I was also thinking I didn’t trust her to be tied to the PVC fence outside thanks to her history of randomly pulling back.

You’d think Gina was drugged. She stood super quietly while I groomed and tacked her. I took her out front with no real plan in mind. She felt relaxed, so after letting her walk and stretch for about ten minutes we picked up a trot. She was moving well; we trotted figure-eights, circles, big loops and straight stretches all around the property. When we were both feeling good, I asked her for a canter.

Gina has the most lovely canter of any horse I’ve ever ridden. It’s easy and comfortable to sit. I can do no-stirrup canter work on this horse all day. But yesterday, I just sat in two-point and let Gina choose her pace. We cantered around for about five minutes, took a short walk break, and cantered another five minutes. Then we cooled out and headed back inside.
The whole time I was on, I didn’t ask Gina for a thing except minor steering and gait adjustments. I didn’t ask her to be on the bit, or to bend, or to do anything except move.
I had fun. A lot of fun. I think Princess Pony had some fun, too. I’m hoping to get some more rides like this on her: easy, low-stress rides that don’t involve much thinking and definitely don’t escalate into arguments. I’m even thinking of getting some ground poles out to canter her over. Maybe this is the year we conquer Gina’s seemingly-groundless angst over jumping!

One thought on “The Importance of Having Fun”