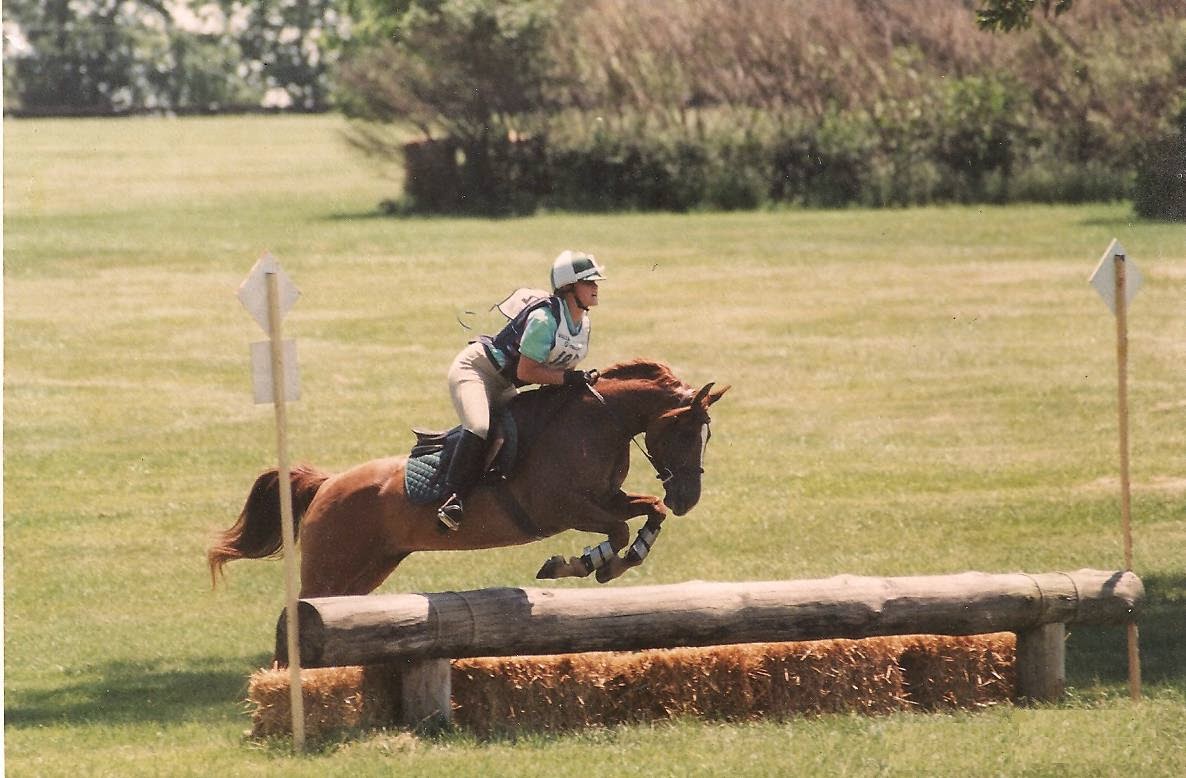 MidSouth Regional Pony Club Rally, Kentucky Horse Park, 2000. I’m riding Buster, who was about as interesting a horse as you could ever want. In this picture, he’s about 10 or 11; I’m 13.
We acquired Buster as a green broke 2 year old at a horse auction about a year after moving to Tennessee. The dates and timeline are slightly fuzzy to me, as this was nearly 20 years ago. However, the night of the auction is crystal clear.
Let me set the scene for you: the horse auction was a weekly event, held on Friday night. My parents and I would go nearly every week. I couldn’t tell you why, although I suspect it had something to do with my dad’s penchant for cheap, unusual entertainment. (He and I would often spend Saturday afternoons at the local Chevy dealership, test driving Corvettes we’d never buy.)
The auction was down in what is best described as a “holler”, one of those backwoods places nestled at the bottom of a steep hill in an area of the state where people still make moonshine and have a ‘Sunday’ pair of overalls. The auction barn itself was tiny and rickety, with steep wooden bleachers for seating, a tiny round pen, and questionable bathrooms. The office doubled as a concession stand; perhaps they thought people would be tempted by the smell and sizzle of greasy burgers while they waited in line to pay their bill. There were some cramped, dark stalls and pens for horses both outside and within the barn.
Every week, the auction would begin with tack. We usually skipped the tack sale; it was nearly all western, although there were often general items like horse blankets and halters. After a short break to clear out the round pen, the horse auction would begin. Sometimes the horses would be ridden in; it wasn’t unusual to see a horse with a very small child on its back to demonstrate how broke or gentle it was. Other times, the horses would be half-led, half-dragged into the tiny, bright pen, snorting and terrified, eyes rolling as they struggled to understand what was happening.
To an eight year old, this was a fascinating spectacle. There were horses of all shapes, sizes, colors, and personality. The whole of the equine species was there, available for the buying. I reveled in the beauty of the horses; my eyes didn’t see their sway backs or scruffy coats or crooked legs. I saw show jumpers and racehorses, Sham of King of the Wind and Walter Farley’s The Black.
The night we bought Buster was a very ordinary night. I had managed to persuade my father to buy me a soda, a rare and delicate treat for me. I walked happily with my parents, browsing the stalls and pens, petting a pony here, admiring a horse there. We found our seats, and I watched the horses get bought and sold. My soda eventually caught up to me, and I soon found myself edging around the crowd to find the restroom.
When I returned to my parents, my mother turned to me and said, “Your father bought a horse.” I stared at her. I said, “No you didn’t!”, but my dad simply grinned at me.
I was, of course, insistent that we see our new horse now. He waited in a dark stall near the office, eyeing the outside world suspiciously. He was chestnut, with a fine, slightly dished head, and large eyes. I asked his seller what his name was. The man said, “I just call him Easy, since he’s so easy to ride.” He estimated the horse to be about two years old and proclaimed him a Quarter Horse.
My parents settled their bill and made arrangements to have someone trailer the horse home for us. We all arrived home in what seemed like the middle of the night. Our new chestnut horse spent his first night tied to a large tree with a longe line because we hadn’t built a fence.
I lobbied hard to name him Eclipse, after the great racehorse, but my mother thought that was too grand a name for our underweight, scraggly-maned horse. She dubbed him ‘Buster’ and he remained so throughout his life.
Buster was an odd horse; he was definitely not a Quarter Horse. My best guess was that he was some sort of Quarter Horse/Arabian/Tennessee Walker mix. He was actually a red dun, with a big dorsal stripe running down his coppery back. He was the easiest keeper we ever had. He was very hardy and never lame. Because he and I were both very green together, he was never very well trained. I would climb aboard him bareback and gallop around the pasture, pretending I was an Indian warrior and he my plains pony. When he was tired of this game, he tried to knock me off by running under a tree.
Buster was my ‘spare’ horse. When I was between horses (e.g. when I got too big for Sadie, when Spike had surgery, when PJ died), Buster was there for me. On a good day, he could jump 4′ (and frequently jumped out of the pasture) and put in a passable dressage test. I once won 4 classes at a jumper show on him; he then dumped me in the middle of an oxer during the last jump off. My father often rode him when he volunteered as a cross-country outrider, or when he was chaperoning my cross-country schooling excursions. He was a well-loved pet for most of his life.
A few years ago, my dad gave him to some of our neighbors who had horses; the last time I was home, Buster was alive and well (and probably close to 25), as fat as ever.