For the first time all week, I was able to get out to the barn and ride yesterday. We’ve had a parade of insurance claims adjusters, plumbers, and, of course, our water damage restoration specialists in and out of the house all week long.

I jumped at the chance to leave the house for a few hours when our water damage restoration guy was gone by noon yesterday. My first stop was at Tulsa Shoe Rebuilders, where I dropped off one of my zippered tall boots nearly two months ago. They’d fixed the zipper for me last year when it broke; when it appeared to have broken again, they offered to replace it at no charge. I was beginning to get nervous they’d lost my boot (you seriously have to see the interior of this place to understand- boots everywhere in no discernible order). Happily, they knew exactly which boot was mine and advised me that the zipper wasn’t broken- just dirty. I was given a tiny, stiff little brush to clean the zipper and told to rub a crayon or any other waxy item on the zipper about once a week to keep it lubricated. Who knew?

When I finally made it to the barn, the horses were all way, way off in the most remote corner of the pasture. I caught Moe and trekked back to the barn to brush him off and tack him up. I decided to head out for a ride in the pasture; since no one had made a fuss when Moe was led off from the herd, I thought they’d be content to stay in their corner while we explored the pond area. 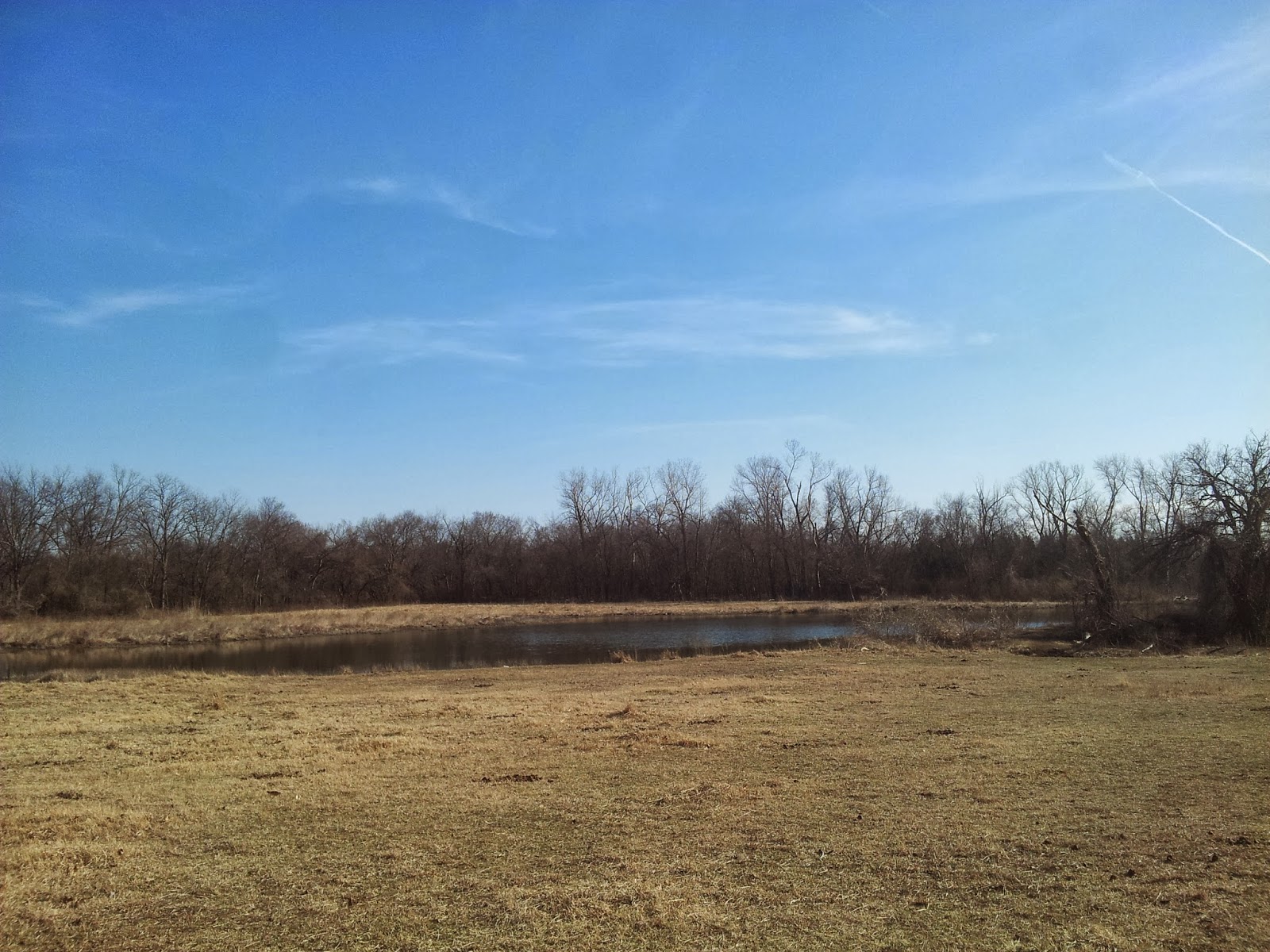 Moe was relaxed and happy. He’s such a nice change from Gina sometimes; he will happily hack out alone, while she can get anxious when separated from her pals. We headed over to the pond, where all that stood between us and the levee was a small drainage channel. It was muddy on both sides and rocky in the middle, but I figured Moe would either scramble or hop across. He balked a little, but after a firm kick, he scooted through the mud and onto the levee. 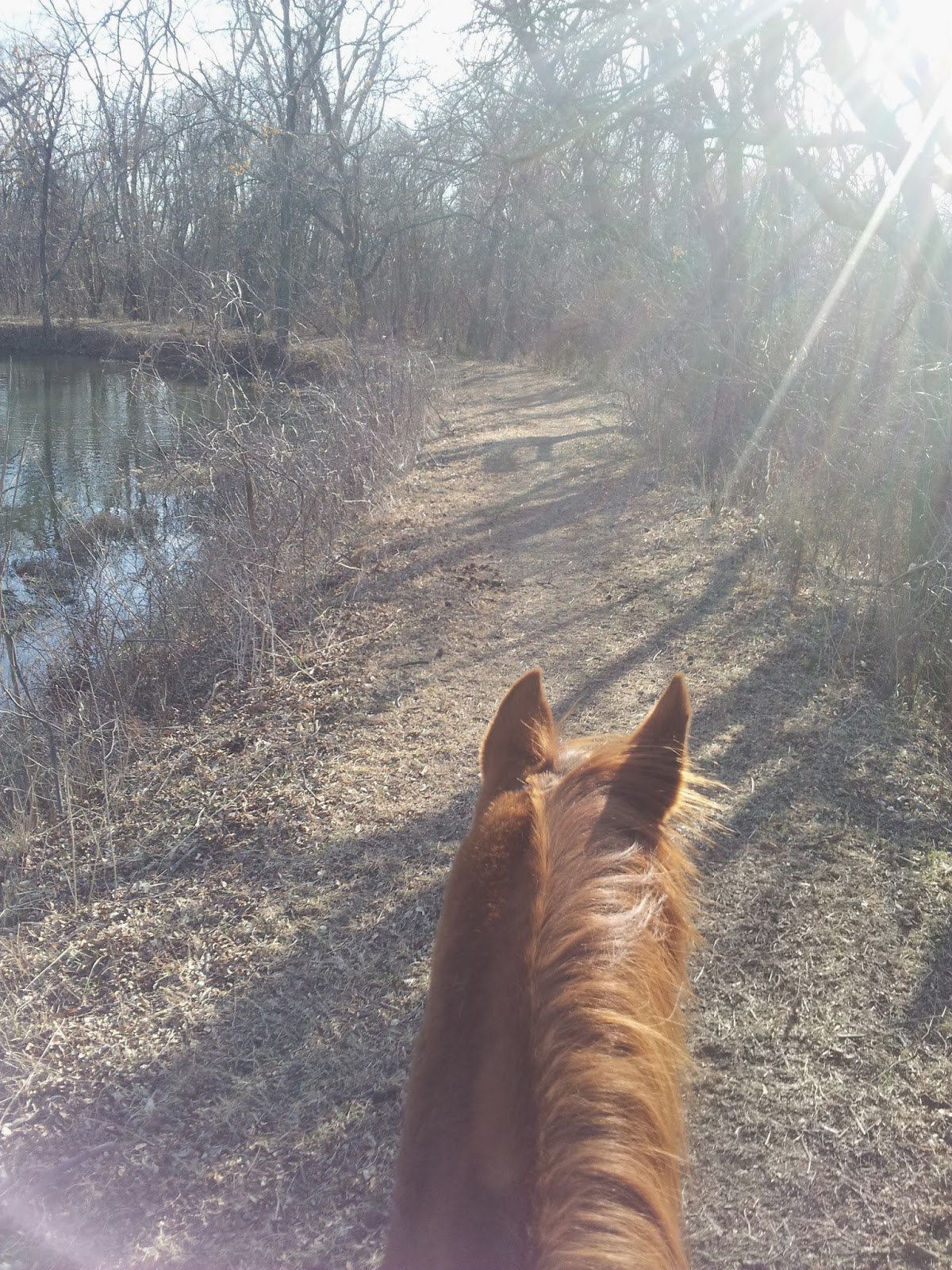 And that’s when the trouble started. Just as we were strolling along the levee, someone whistled. Moe and I  glanced back toward the barn, where I saw a woman standing near the fence. She whistled again and yelled something that I assumed was her horse’s name. She was calling her horses in for dinner.
Now, it was about 4:00 PM, so I can’t blame her for wanting to feed. What I don’t understand is why she didn’t walk out to catch her horses, instead of whistling and yelling. Her horses came galloping in toward the barn with the rest of the herd hot on their heels. Moe was understandably antsy to see what the fuss was about; several very firm half-halts later, he was still jigging and fussy, but no longer in danger of falling into the pond.
We continued our walk on the levee. When we encountered another drainage channel, Moe clambered through it gamely. There’s a big flat area on the far side of the pond; Moe was convinced this was the best place to work on his piaffe. I pushed him into a real trot, which he was not happy about. When he zoomed around, I pushed him into a canter. He seemed to settle into a happy rhythm for about ten strides; then he let out three bucks in a row.
At this point, I’d had enough of his hijinks; he is 19 years old, has had enough experience that he shouldn’t be a raging lunatic just because his horse friends go zooming by a hundred yards away from him. So I did what any sensible person would do: I ran his ass into the pond.
Suddenly being in cold water up to his knees was apparently a big enough shock to get him to stop being an idiot. He took a couple tentative steps toward the other side, but the footing was slippery. I turned him around to get back to land. He nearly slipped and fell, but recovered and we got back out without any harm.
I thought his silliness had passed, but I was wrong. Five minutes onto dry land and Moe was back to jigging. Exasperated, I let him trot back toward the levee. He put in a good jump over the drainage channel, cantered very reasonably along the levee, and leaped over the next drainage channel and was now galloping strongly.
Toward this:
Moe is a cross-country machine. Other than our very first cross-country schooling show together (where he refused one fence), we’ve never had a jumping or time fault (on an XC course, at least). He’s jumped picnic tables, tarps, the hood of a car. If I point him at something, no matter how badly I ride it or what ugly distance we get, Moe will go over it.
So you can imagine my mild panic as my horse landed from a ditch and started looking for the next jump. I sat up, looked anywhere but the 4′ fallen tree, and prayed Moe wouldn’t think that’s where he was supposed to be headed. I’m sure nothing good can happen when a fat, out of shape, 19-year old Thoroughbred and his fat, out of shape rider attempt to launch over a very large obstacle.
Fortunately, I convinced Moe that our next jump was off to the right; he happily galloped right on and jumped over a tiny log. Now satisfied that we’d completed whatever competition we were in, he dropped to a walk and behaved himself while I cooled him out. Except for a few whinnies, he wasn’t even concerned where his friends had gone.
Moe was only barely sweaty and seemed entirely content to munch treats while I untacked and groomed him. When I turned him back out, he trotted off only to get bitten on the butt by Gina.
I guess I should start conditioning him (and myself) for a three-day this fall. Sigh.